Apple MacBook Pro Refreshed For the Rest of US

Apple updated their Apple MacBook Pro by adding a retina display, but they didn’t forget about the rest of us who can’t afford the expensive new display technology. The MacBook Pro 13″ and 15″ models also got some love with faster processors, more powerful graphics and a longer lasting battery. They also added faster ports and an option for bigger SSD drives.

Get the details about the new MacBook Air and the MacBook Pro with Retina Display posted earlier.

Even though these machines don’t get the higher resolution retina display, users will enjoy the speed that comes from the new 2.3GHz or 2.6GHz Intel Quad-core i7 processors. Also the Intel Graphics 4000 graphics speed up every day tasks while the NVIDIA’s GeForce GT 650M processor with either 512MB or 1GB of video memory will help when users need more power to play games or edit video and big images.

Apple didn’t add two Thunderbolt ports to these lower end models, like they did on the higher end retina display model, but they did bump the USB ports from 2.0 to 3.0 thanks to the new Intel chipsets. If users still need FireWire 800 and Gigabit Ethernet, they won’t need the $29 dongle that Apple requires with the more expensive model because Apple still includes those ports on the lower cost models. That seems counterintuitive, but it’s due to not using the thinner body design Apple used in the MacBook Pro with Retina Display.

These models get the HD FaceTime camera. Apple also added one of the most under-appreciated spec bumps, a longer lasting battery. This model promises up to 7 hours on a charge. You also still get a DVD drive, something the more expensive model leaves out to shrink the body.

Like the Air and Pro with Retina Display, the baseline MacBook Pros won’t ship with Mountain Lion. It doesn’t drop till next month, but users who buy now get a free upgrade. 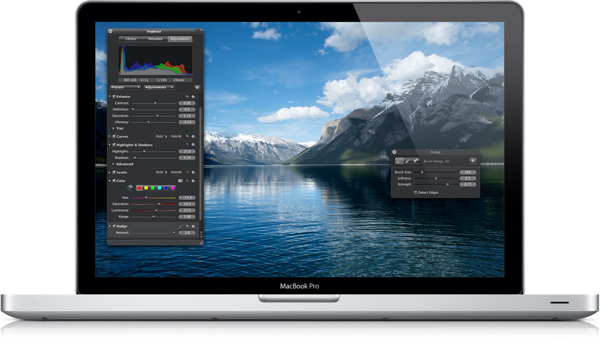 To upgrade the hard drive on the lower end model you can choose the following:

On the higher end 13″ model upgrade the hard drive with the following options:

It costs less to bump the more expensive 13″ model because it already ships with a higher capacity 750GB hard drive compared to 500GB on the lower cost model.

The 15″ MacBook Pro without Retina Display configurations start at $1,799 for a 2.3GHz quad-core Intel Core i7 processor and 4GB or RAM and 500GB 5400 rpm hard drive. It only has 512GB of video memory. The other 15″ model starts at $2,199 which comes with 2.6GHz processor and 750GB drive. The video memory uses 1GB of GDDR5 RAM. Optional upgrades include the following for the lower cost model:

Options for the higher cost 15″ model includes the following:

Check out the details at Apple. You can read about the new Apple MacBook Air or the Retina Display version of the MacBook Pro as well.