At their October 2016 event, Apple unveiled a new 2016 MacBook Pro with some interesting new features. Included in these new features are the Touch Bar and Touch ID for signing into the computer and websites. In addition, Apple designed the updated 2016 MacBook Pro with a thinner design, slightly faster specs and now with a Space Gray model. They still come in two sizes with a 13.3-inch and 15.4-inch Retina display.

Skip the very end for links, availability and prices.

The Touch Bar sits just above the keyboard between the number keys and the screen. It replaces the old function keys with shortcuts. Gone are the traditional keys, but not the functions that those keys did. 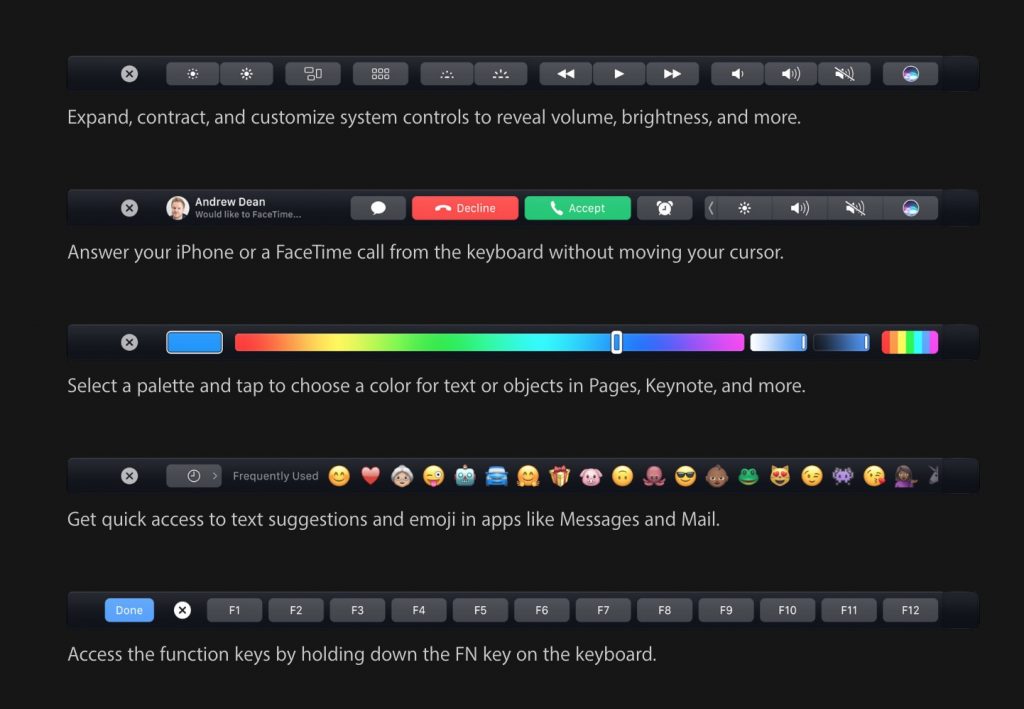 The new Touch Bar on the 2016 MacBook Pro will change based on what the user is doing.

The Touch Bar uses a narrow touchscreen that changes contextually depending on what the user is doing. For example, if the user opens Apple’s Messages app in macOS 10.12 Sierra, then they will see the emoji bar (2nd from the bottom in the shot above). Holding down the keyboard’s Fn key at the bottom left corner brings up the traditional keyboard function keys in the Touch Bar (last in image above). If you’re using a media player app, the Touch Bar shows play/pause and other media control shortcut buttons (first in image above).

Developers can design their apps to use the Touch Bar as well. For example a gaming app might put a weapons chooser in it. A photo editor could include their editing tools. For video editors, it can show the timeline. Imagine zooming in on the video project’s timeline or tapping to advance in a spot later in the video while editing in Final Cut or Adobe Premiere.

Apple said that Adobe and Microsoft plan to support the Touch Bar in their suite of apps. Apple just updated their iWork apps and will update Sierra to support it by the time these systems ship in November 2016. 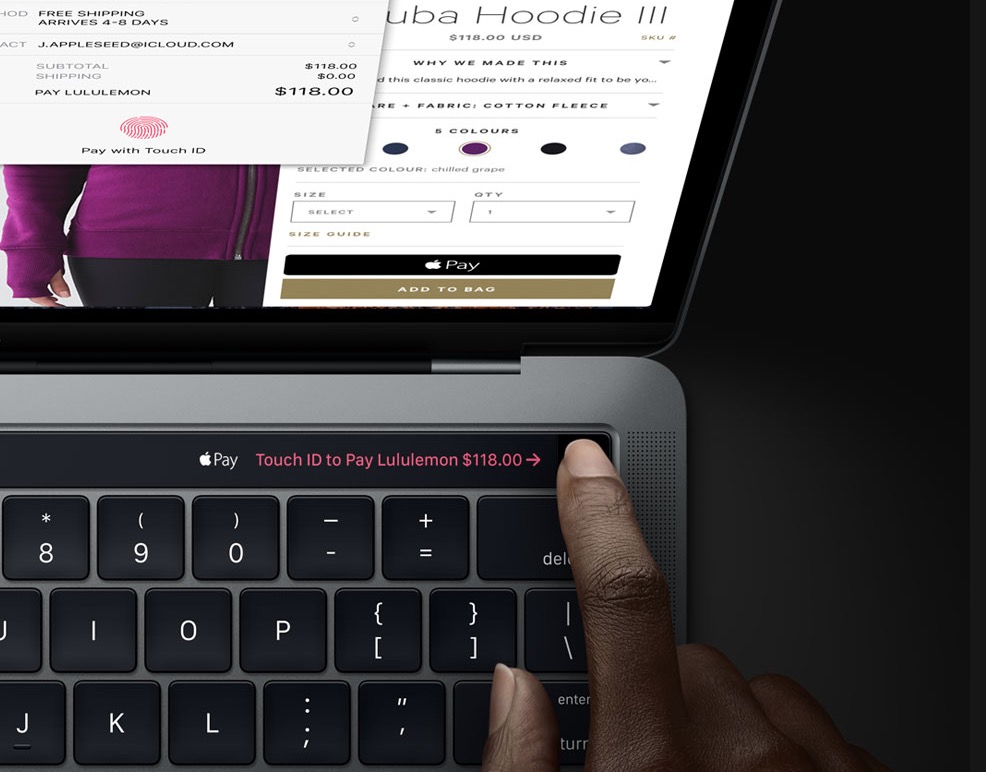 The Touch Bar adds a Touch ID for logging into the OS and websites or for Apple Pay.

The iPhone and iPad include a Touch ID home button that reads the user’s fingerprint for logging into the phone and websites. Now that feature comes to the MacBook thanks to the Touch ID built into the Touch Bar. 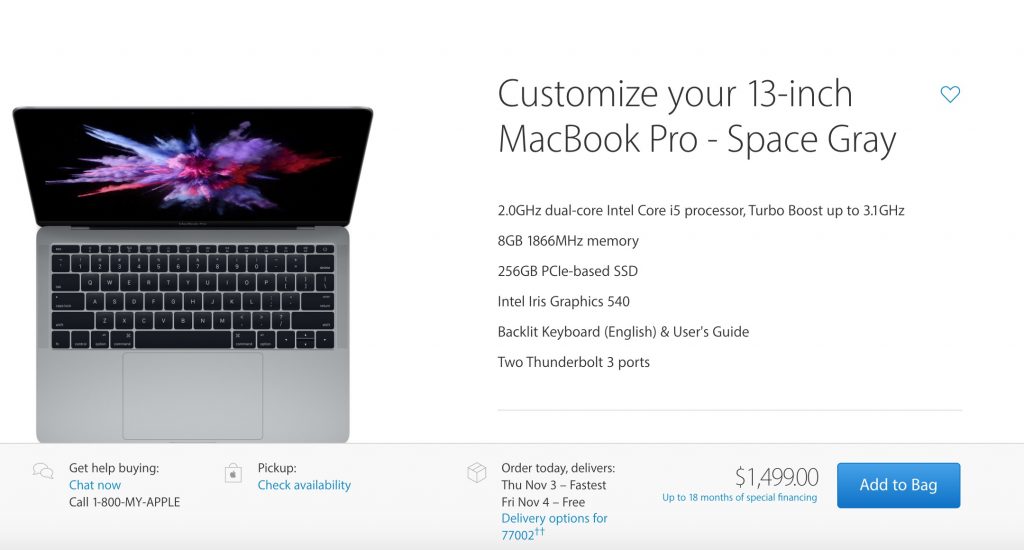 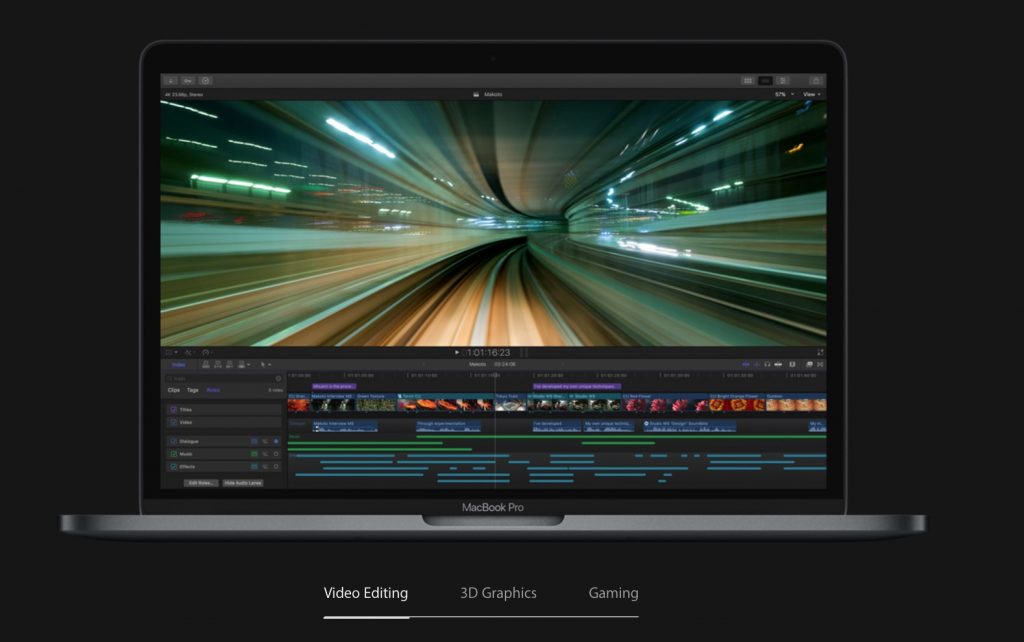 Apple promises 130% performance graphics bump on the 15-inch model thanks to faster processors and better graphics. They also say the computers come with up to 2.4 times the computing power.

The model with the Touch Bar starts at a 2.9GHz dual-core i5 processor. Users can boost that to a 3.3GHz Core i7. 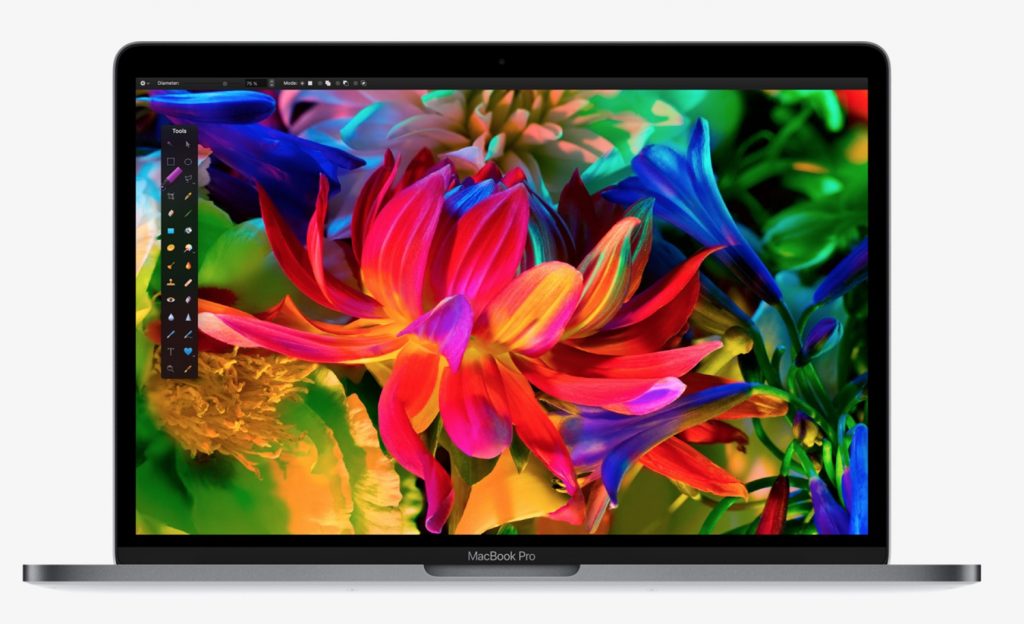 These graphics options power some beautiful Retina displays with resolutions starting at 2560-by-1600 on the smaller 13.3-inch system. The larger 15.4-inch model gets 2880-by-1800 resolution.

The 13-inch systems will come with a minimum of 8GB of RAM, but users can boost that to 16. The 15-inch models start with 16GB, but you can’t get any more RAM unfortunately.

The computers come with up to 10 hours of battery life. The company does a good job of accurately stating their computer battery life. 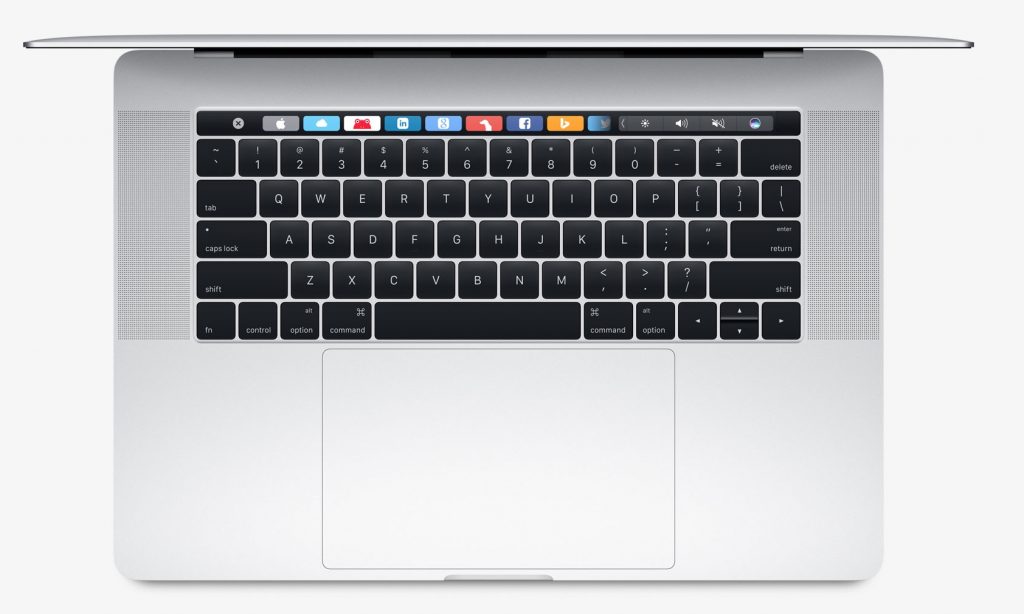 Apple’s MacBook Pro keyboards and Trackpads lead the industry. They made a great trackpad potentially greater by almost doubling the size.

The great keyboard gets replaced by the same controversial style of keyboard available in the 12-inch MacBook with what they call the butterfly mechanism. A lot of touch typists like me hated this keyboard. Apple updated it and says it feels like it has better key travel, meaning it gives users a better tactile feel while they’re typing. Let’s hope that translates into a better typing experience because a lot of people like me hate the keyboard on the 12-inch MacBook.

The models with the Touch Bar all get 4 Type-C Thunderbolt ports. The cheaper version comes with only 2 Type-C ports. They all support USB-C, DisplayPort, HDMI, Thunderbolt and USB 3.1 connectivity. The user will need a dongle to get some of those functions.

As you can see with the images above, the computers also come with the combo Headphone/mic jack.

We also get 802.11ac Wi-Fi and Bluetooth 4.2. Add a 720p Facetime Camera. It’s a little astonishing that they didn’t bump those to 1080p HD cameras. Apple promises louder speakers and supports stereo sound with the included headphone jack.

They’ll all run macOS Sierra. The user will get the computer, the unique Apple power brick and a USB Type-C charging cable.

Users can order these systems today. The lower cost model ships right away, while the version with Touch Bar will not ship for 4-5 weeks as of the date of this post. The prices are as follows:

We’re already seeing deals on the new 2016 MacBook Pro with savings from some retailers of just over $200.