On the iPhone it was common to find very good apps that do what you want and cost nothing. So far, the iPad App store looks less giving. And having to pony up again for essentially the same app is a little frustrating. 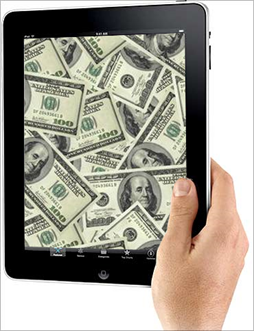 Here are a few examples to illustrate the iPad inflation effect.

There are just a few examples. I have yet to find an app that is less expensive on the iPad.

In addition to higher costs, some programs are requiring a re-purchase of the same app. For example, I use Twittelator for the iPhone. But to use the app for the iPad I will have to pay another $4.99 to use Twittelator Pad. The same is true of many other apps.

The argument in favor of these practices is that the iPad is a different device and offers much more. But one could say the same of the difference between the iPhone and the iPod Touch, yet the same applications work for both devices. Is size of screen enough of a difference to make apps worth double or paying a second time?