The network gurus at the Princeton University Office of Information Technology discovered another issue with the way the Apple iPad handles Wi-Fi connections. This is in addition to the reports of low signal strength and problems connecting to Dual Band Wi-Fi routers. 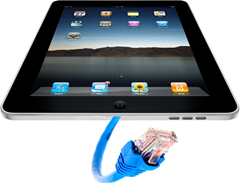 The issue has to do with a problem with the iPad’s use of DHCP, the protocol the device uses to handle a connection to a Wi-Fi network. DHCP or Dynamic Host Configuration Protocol is the way a networkable device gets an IP address, and other configuration information, from the server. It is called dynamicâ€ because the server does not always give it the same address. The benefit is you do not have to change your address information every time you want to connect to a new network. It also allows people who know little about networking to connect their computers and other devices to a network. An IP address is like a phone number for your networkable device. It identifies your device on the network in order to route the packets of information that you either send or receive over the network. It is similar to the way the phone company uses your phone number to direct calls to a from your line. DHCP servers temporarily assign you a number that looks like this: 192.168.1.1, where each segment of numbers can be anything from 0 to 255.

What is happening with the iPad, according to the people at Princeton, is that the server is assigning the address to the iPad and then when it’s screen is locked and it goes to sleep, the iPad is not releasing the number as it is should. However, the server thinks that it has and assigns that number to another device. When the iPad tries to reconnect, it thinks the number still belongs to it. Since the network server has assigned the number to another device, there is a conflict. This causes the iPad to stop being able to use the network until it releases the number, which requires user interaction due to a problem with the iPad.

Comparing it again to your phone, what if you had a phone number and the the phone company thought you had moved so they disconnected your line and gave the number to another customer. From then on, whenever you tried to call out on your phone, it would not work. You would have to call the company back and get a new number. With the iPad it is like it told the company you moved but then didn’t let you know the number is disconnected.

Here are four possible solutions in order of what I think is the best to worst work around for the problem until Apple issues a fix:

The fourth solution is a more permanent fix, but you will have to remember to manually turn off your iPad every time or you will see reduced battery life with the screen turned on all the time. You will also have unwanted tapping of screen items as you carry around the iPad.

The reason Princeton discovered the DHCP issue while others might not have is that they say they monitor their networks more closely looking for these kinds of obscure issues. Others just ignore them on their servers.

How widespread is this problem? According to the post at Princeton’s Network Systems site 41 people have connected to their network via an iPad. Roughly half the iPads attached to our network had malfunctioned in the same wayâ€¦â€ As of April 18 that count was 25 of the 41 iPads on their very large campus.

We are continuing to work with Apple to provide them with technical data to resolve the issue,â€ said the author of the the post. The post also shares the Steps to Reproduceâ€ the issue at the bottom of that page.