VLC Media Player for iPad Now Available, but Feels Like an Alpha Release

The VLC Media Player, which many Mac and Windows users utilize to play a large collection of various videos files is now available for free from the Apple App store. The App is exciting for these users because the desktop app supports a wide variety of codecs and the VLC app also claims to support many different file types and codecs.

As you can see from the screen shot below there are very positive early reviews in the app store with 137 ratings averaging 4 out of 5 stars, but not all are happy with the app for a couple of reasons. 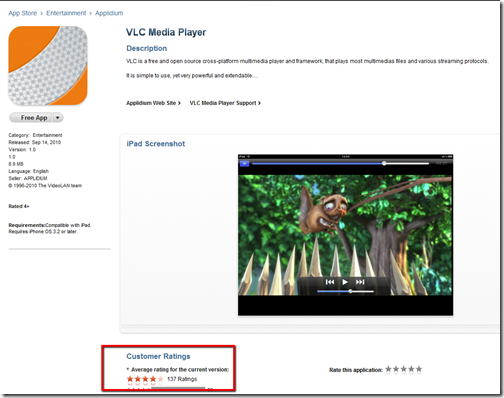 First, getting files on to the device requires the clunky file import process thought up by apple, but widely criticized.

The process is complicated and requires users to hook up to their computer and sync via iTunes.

Now, after a sync, the file should be loaded on the iPad. This is where the other problem comes into play. In my very limited test, I could not find a file that would properly play on the app. I chose a simple WMV file that plays fine on the desktop version. I also tried to load an AVI file and an MPG file. None of them would work. The only file that the app would even recognize without giving me the following screen, was a MOV file created by my digital still camera. That file can be imported into iTunes through the File Add method which is actually easier and doesn’t require another app. 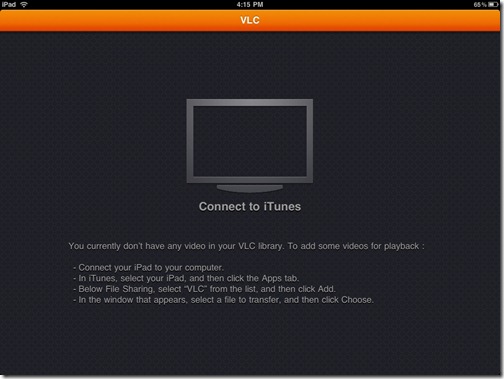 When I did get the MOV file to be recognized the result was the app crashed every time I played it. I added it to iTunes, synced the iPad, and it played fine with the built-in video player.

In reading a few comments on various stories about the availability of VLC, others seem to be having the same issue. The description says (see first screen shot above) that it will play most files and is easy to use. In my view, they miss on both marks. It is very possible that the three out of four files I chose are just not part of the list of supported codecs for the iPad version, but they are very common media versions. Add to that the instability of the app, and it feels more like a rush release, in need of testing, than a final release.

Still, the fact that the VLC app was approved is actually a positive note and marks the relaxing of app store rules. I look forward to seeing what this app will become with improvements.

Lifehacker has a post about getting files onto the device and it says that VLC doesn’t use the built-in hardware video acceleration which may be why some of my files didn’t work well. It also confirms the app’s unstable nature and suggests using AVI files with DivX encoding for the best performance.