Pick up those French fry boxes, throw away those soda cans, and put that netbook in the trash if you aren’t gonna use it anymore!â€ 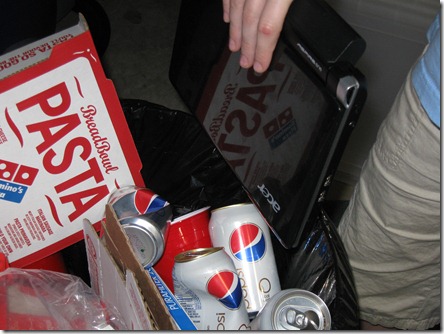 Can you imagine your mother scolding you that way? Maybe you could up to that last one. If Google CEO Eric Schmidt is right, that might be the way it goes with Chrome OS based netbooks. Speaking at the Atmosphere Cloud Computing Summit, Schmidt said that the computers used to run the browser based OS will be completely disposable.â€ He said he cannot control the prices that hardware companies set for their computers. But since they are giving away the cloud based OS, there will not be a Microsoft taxâ€ allowing manufacturers to lower their prices to the $300-$400 mark.

Below is the interview in which Schmidt says that the devices will boot in 2 seconds and will be available in about 6 months. To get to the portion of the interview cited, advance past the 13:00 minute mark.

The way he answered each question, made it clear that Google is not planning to make any Chrome OS PCs themselves. He said, We’re not in that business.â€ But then he fudged a little saying, We’ll see.â€

Google’s model is to organizeâ€ the digital content that we consume. He asked the audience to turn off their digital devices saying that what he just asked them to give up was profound. Access to instant real-time information is very much a part of our lives. Google wants to be the conduit for that information, mixed with ads of course.

What is also profound is the juxtaposition of his comments with the release of Apple’s iPad, a device which is made primarily to allow the hardware to disappear so that the content is the focus. Steve Jobs and Eric Schmidt seem to see the same future and each of them wants to be your valet to the massive amounts of available digital content.