How To Watch the World Series Online and On The Go

It’s that time folks, break out your Crackerjacks, smartphones and other gadgets for the World Series. If you’re looking for a way to tune into the World Series games between the San Fransisco Giants and the Texas Rangers then you’ve come to the right place. We showed you how to watch the Major League Playoffs online and on the go and now we are going to show you the best places to watch and track the World Series online or on your internet connected devices.

How to watch the World Series Online:

PostSeason.tv includes eight different camera angles, four of which you can watch at a time, giving you an in depth experience that might rival being at the World Series. The video feeds are not in HD unless you happen to be a MLB.TV or MLB.TV Premium subscriber.

How to watch the World Series Online Outside the U.S.:

If you want to watch the Major League Baseball World Series outside of the U.S. you can use the international version of PostSeason.TV to watch. The international subscription is $19.95 and includes HD quality broadcasts, local radio broadcasts and more. If you’re also a NFL fan you can get PostSeason.TV and NFL GamePass for $239.99.

How to watch or listen to the World Series on your iPad, iPhone, iPod Touch BlackBerry or Android:

If you have any of the major smartphones or the iPad you can keep track of the World Series wherever you are with the MLB At Bat 2010 app. The experience will vary between the different apps as far as video goes, but you can listen to live game audio of the World Series on the iPhone, iPod Touch, Android and BlackBerry devices. All of these apps cost $4.99, to get video in-game video you will need to pick up a PostSeason.TV subscription for $9.99. 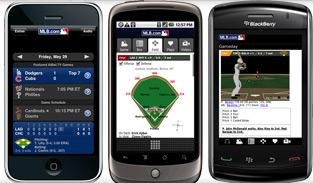 The MLB At Bat app includes the following:

MLB At Bat 2010 for the iPad, iPhone and iPod Touch – On the iPad and other iOS devices you can view the same quad camera viewing experience you receive on the computer and you have the ability to listen to your hometown announcers. You can check out MLB at Bat 2010 on the iPad below and learn more in our review of MLB at Bat.

MLB at Bat 2010 for Android – The Android MLB at Bat 2010 app provides live audio, detailed stats and scoreboards. If you have a Sprint EVO, Epic or a Verizon Droid Incredible you can combine the app with a PostSeason.TV subscription and watch in quadmode.

MLB at Bat 2010 for BlackBerry: With this app BlackBerry owners will be able to listen tot he game, follow pitches and get up the minute box scores and stats. There is currently no way to watch video of the World Series on the BlackBerry.

How to watch the world series with SlingBox:

If you have a SlingBox you can also use it to watch the World Series on the go thanks to SlingBox in your browser and SlingBox apps for the iPad, iPhone, iPod Touch and Android devices. This is the only way to watch the official Fox feed on the go.

How to Track the World Series on Other Phones:

If you don’t have one of the phones covered above you can hit up the mobile version of MLB.com for scores and live game audio using MLB.com GameDay Audio. Here are a list of supported devices.

How to get World Series Text Alerts:

If you want the simplest way to get game alerts sent to you can get text alerts sent to almost any phone. For $3.99 you can get Team Alerts for scores, breakign news and summaries. You can also sign up for Player Alerts which offer player specific updates and TeamTXT which is a free version of the Team Alerts which requires you to send a text message to get the score.