How to Use the Chrome Task Manager

Did you know that Chrome has its own task manager, entirely separate from the one you might find in Windows or OS X? We’ll take you through what it is and why you might want to know about it.

Google’s Chrome web browser, especially on the PC and Mac, is famously known for performance and battery life issues. Some of those issues are related to the browser’s notoriously poor memory performance (it will sometimes eat just about every bit of memory that it can); others are related to how Chrome uses your laptop’s CPU.

What is the Chrome Task Manager?

One common source of problems, however, is Chrome’s popular library of extensions. Extensions, if you aren’t already familiar, are little bits of software that you can download and install into your web browser in order to expand upon its base functionality. Some of the most popular extensions will block ads, change how webpages look, or make sharing content to Facebook and Twitter easier.

This is all to give a little background on why you might want to look at Chrome’s criminally undervalued tool: the Chrome Task Manager. Just like Windows’ Task Manager or the Mac’s Activity Monitor, you can use this tool to see exactly how Chrome is interacting with your system. 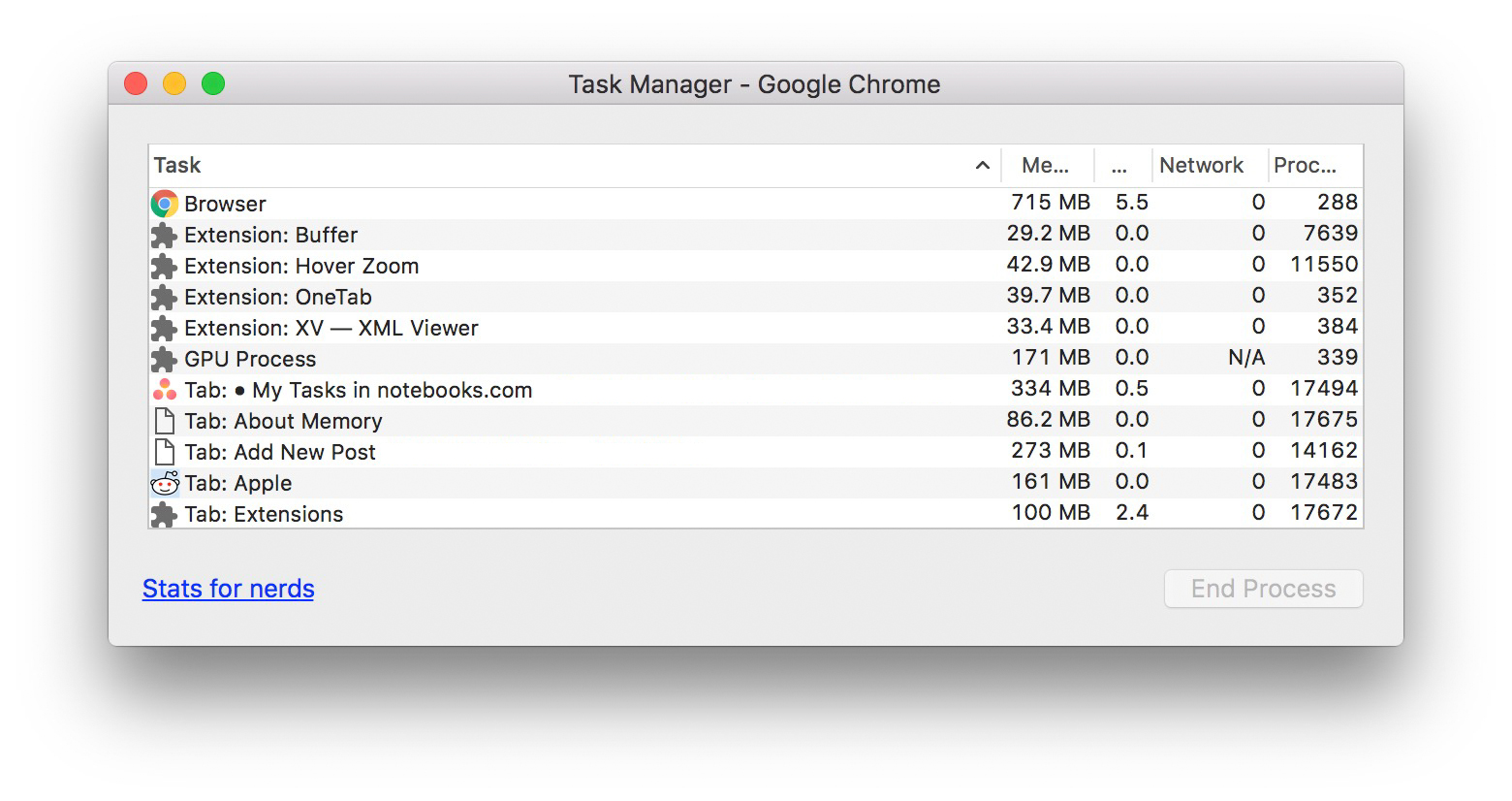 When you open it up, you’ll be presented with a series of columns labeled Task, Memory, CPU, Network, and Process ID. We can safely ignore the last column; it’s used to identify the specific processes your browser is running on the CPU.

Task, unsurprisingly, identifies the what is using resources. You’ll see an entry for the base Chrome browser, entries for every tab you have open, and tabs for every extension you have installed and active (if you have extensions installed but have disabled them in your Extensions submenu, they won’t appear in your Task Manager – they’re basically turned completely off). Memory shows how much RAM each task is ostensibly using. CPU shows processor use for the tasks, and as you can probably guess, Network will show how much network traffic a site is process is using (note: most of the time, this will be filled with zeroes or N/A; downloads won’t show up here).

You can customize the columns that get displayed by right-clicking on any of the column headers and selecting from a list, but fair warning – most of them are really only of interest to developers. They’re fun to explore, though; you can see how much of your graphics card memory Chrome is using, among others.

How to open the Chrome Task Manager

Accessing the Chrome Task Manager is actually really simple. With Chrome open, click on the Chrome menu in the upper right-hand corner, which now looks like three horizontal lines stacked on top of each other. In the drop-down menu that appears, click on More Tools, and in the new menu, click on Task Manager.

You can open it like this on both PC and Mac, but Windows users have an even easier method. Again, with Chrome open, just press your Shift + Esc keys at the same time (it’s easy if you hold down Shift and tap the Esc key, then let them both go) and the Task Manager will pop up in a new window.

How to use the Chrome Task Manager

Now that we know what the Chrome Task Manager is, and how to open it, why would you want to bother?

Another good use of the tool is to keep an eye on what the various extensions you’ve installed are doing. Extensions are a great way to introduce instabilities – or worse, malware – on your system. If you look at the Task Manager and find that an extension is using an unexpected amount of memory, CPU, or network, it might be a good idea to uninstall or disable that extension.

If you look at the bottom of the window, you’ll see a link and a button. End Process does what it sounds like – if you have something acting up, you can click on the troublemaking task, hit the End Process button, and Chrome will kill it.

Occasionally you’ll find that a tab becomes unresponsive, and it’s become so frozen that you can’t even click on the tab’s ‘x’ symbol to close it. That’s when the Task Manager can become so useful, as you can specifically close a single tab without having to force quit the entire web browser, and potentially lose unsaved work in the other tabs.

You’ll see your tab replaced with this text – you’ve probably seen it before if you’ve had a tab, or an extension running within the tab, crash on you. Chrome was one of the first browsers to run all of its tabs and extensions each within their own process, which is what allows you close these tabs or extensions without bringing the whole browser down.

The other link on the bottom is labelled Stats for nerds. That’s mostly true. But it does offer one feature that anyone could find useful: it will show you how much memory is being used by every browser that’s currently running on your system, not just Chrome’s own.

That’s something that you can find by running your own computer’s Task Manager / Activity Monitor, but it offers a nice comparison since you could load up, say, Safari or Microsoft Edge, Google Chrome, and Mozilla Firefox with the same tabs, and see how much memory they’re all using. In the picture above, you can see that Google has found Safari and posted its memory details just below Chrome’s.

If you’re viewing this post in Chrome, you can copy and past chrome://memory-redirect/ into your address bar at the top. It’ll bring up this About memory screen directly, without having to first launch the Task Manager.