Apple Security Update Works Against MacDefender, So Does Sophos

Apple’s new security feature which daily updates the built-in security virus and malware definitions list in the background works as planned when dealing with the MacDefender threat. Apple no longer updates the list via Software Update, but instead silently in the background as soon as it is available and your computer is online.

As a review, MacDefender and many variants have hit the supposedly virus-free world of Mac recently with a lot of attention. Apple acted relatively quickly and offered an update that was designed to deal with the problem. Then, within hours of the update the MacDefender makers created a new version that supposedly got around this update. The ball was in Apple’s court.

Today, Apple’s daily virus definitions update includes the new variant making your MacBooks and other OS X computers safe once again, for now. We wonder how long before someone begins a betting pool for predictions on how long each side takes to respond to the other. This is a back and forth fight which we hope Apple never gives up. 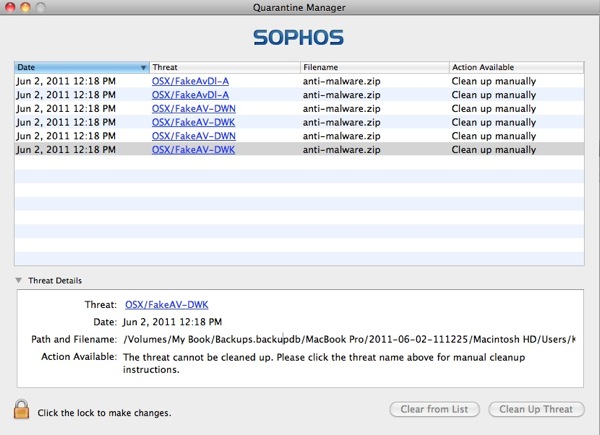 Sophos did its job in the first hour after installing it this morning. Having that bad file in a backup was a minor problem but it is nice to know that the Sophos software is up-to-date enough to find the threat.