Apple has just released an update to the Mac OS X operating system, bringing the version up to OS X 10.6.7, and addressing the issues many users are reporting with the early 2011 MacBook Pros including freezing and external display glitches. 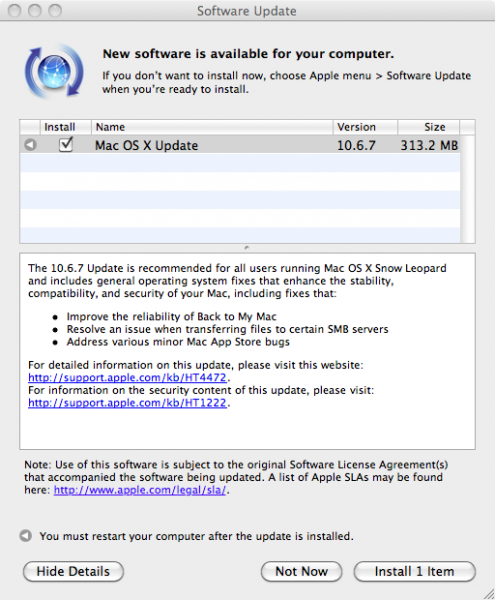 The Mac OS X 10.6.7 can be downloaded  by clicking on the Apple in the upper left corner of your mac and choosing Software update. After the newest OS X version is found, you can download and install OS X 10.6.7.

The Mac OS X 10.6.7 Update for MacBook Pro is recommended for all early 2011 MacBook Pro models.  It includes general operating system fixes for Mac OS X Snow Leopard that enhance the stability, compatibility, performance, and security of your Mac, including fixes that:

In addition to addressing the issues on the new MacBook Pro models, this update includes the following fixes;

The Mac OS X fix is free and available to all current OS X Snow Leopard users. There is hope that this is the update could address some of the issues that a minority of users have had using their MacBook Air with external displays.