Apple released an update yesterday that deals with the MacDefender problem and also will help you avoid future infections. It adds a new tool to the security features of OS X that daily updates a list of known malware. When you download a file from the Internet, the operating system will scan the file and warn you if you are downloading a file with a known threat.

The database of threats will be updated in the background through the web every single day. This will give you another level of security and help you keep from getting bit by the MacDefender bug or any other. While you could conceivably get hit by an unknown piece of malware, it is less likely so long as Apple does a good job of finding and adding the threats to their daily updated database.

This is the updated security options in System Properties. Notice the item regarding a "safe download list".

Thanks to the new “safe download list” which will be updated every day in the background so long as you are connected to the Internet, you will be safer as you surf. When you attempt to download an infected file you will see the following warning:

Apple’s handling of the MacDefender threat has proven that the Mac is innately more secure than a Windows PC, not because of the hardware or operating system’s fundamental underpinnings, but because of the people supporting it.

In fact a Windows 7 PC is a very secure OS so long as you avoid porn, pirated software, flash games and don’t open email attachments unless you know the person who sent it and you were expecting then to send it. Even if you do all four of those things, you still need to be vigilant by running security software. Not having security software on Windows is about as smart as driving a car without a seatbelt. You will be fine most of the time, but it is that one moment when you least expect to get hit that hurts you.

The Apple update and strategy of putting security scans in the operating system itself is evidence that they take this seriously. What took Microsoft years to realize has taken Apple only months. Windows still doesn’t have this kind of system built into it. A user can go get Microsoft Security Essentials, a very good free security tool. But this should be built into the OS just like it is in OS X. This one philosophical difference is evidence that you will be safer on a Mac than a PC.

Apple only recently began to have a real problem with malware. I can remember the many years that my Mac using friends would brag to me a PC guy that Mac was better because there were no viruses. You also hear the popular complaint that Windows is riddled with security flaws. I never believed the hype on either side of the argument.

Windows 95, 98 and the early days of XP were more vulnerable than they should have been. Those were the early days of the common Internet. It took Microsoft a long time to realize that they had a security problem. Now, with Windows 7 and Internet Explorer 9 you are pretty secure so long as you are smart. That means doing the following:

If you do all of the above, you are very unlikely to ever get a virus on a Windows PC.

On the Mac side of things, the main reason the Mac was more secure and didn’t need anti-malware software was because it was less of a target. There just were not as many Macs to hit. Now that the Mac has become much more popular, it is a target. It is no coincidence that within a year of Apple announcing that half of all new Macs last year went to first time owners that we are starting to see Mac malware.

The real difference however is the way Apple is dealing with the situation versus the way Microsoft dealt with the problem when it first hit and still deals with it now. Consider the following: 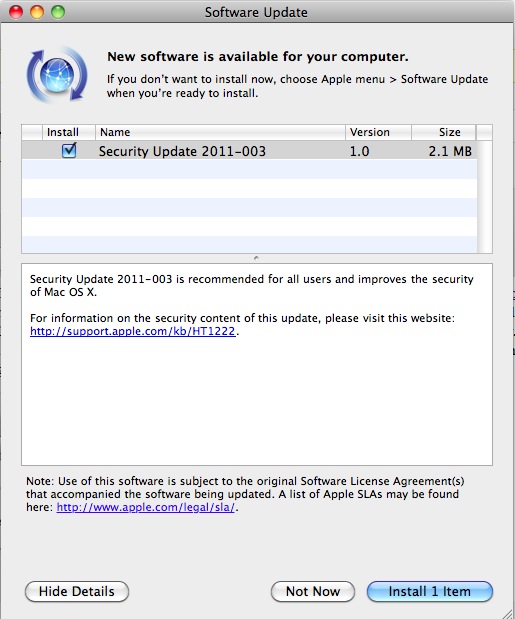