Previously we showed you how to keep track of the NFL on the go and one of those solutions was the NFL Sunday Ticket’s web site and mobile apps. This weeks’ iPad App of the Week is the Sunday Ticket app from DirecTV. 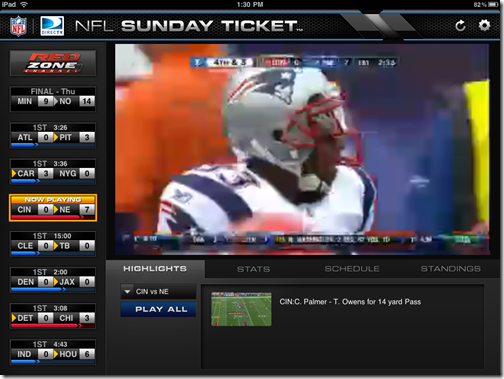 Log in with your DirecTV user name and password and along the left side you will see the list of games. Remember this is only on Sunday. After Sunday, there is a list of the final score with stats, team and league schedules, and standings. On Sunday, tap on a game and the video for that game begins to play. It will be very low quality at first until the cache has time to catch up. That way viewers can at least see the game, until enough higher quality video has been downloaded. The quality is pretty good. At times it will freeze and sometimes the entire app freezes. But the majority of the time it is as good as watching standard definition video over the air or over a good cable connection. It is supposed to be HD, but it is so highly compressed that it doesn’t quite look high def. 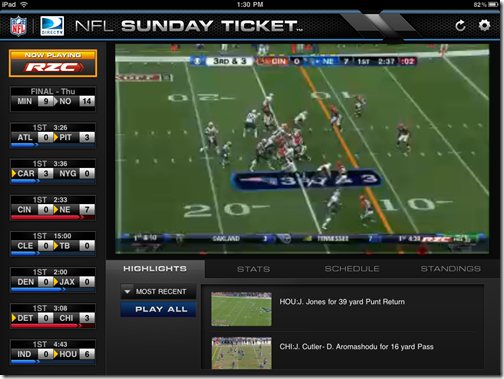 To watch the games in full screen mode, tap on the video screen and tap the tiny arrows pointing out in the lower right corner of the video screen. The video can then be enlarged to fill the entire screen by tapping the button on the upper right corner with two arrows in a square pointing up and down. It removes the letter box and zooms in to fill the whole screen. (see the screen shot below of the Pizza Hut lady to see how it looks)

My video demo of the Sunday Ticket app

The video control has a button to pause the video. The volume slider is below it. To the left of the play/pause button is a button that takes the video back 30 seconds, so a viewer can get a replay of the previous play immediately. The button to the right of the play/pause button looks like a DVD skip button. It skips to the end of the current video, if you have paused or gone back 30 seconds or more. 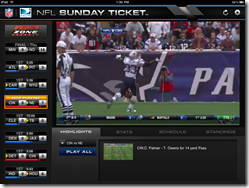 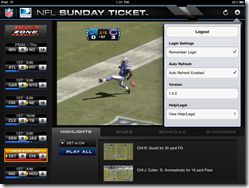 To exit full screen mode either hit the minimize button on the video control toolbar at the bottom or the Done button. The minimize button looks like two arrows pointing inward at a 45 degree angle. Either method will reduce the video so you can see the list of games and it will pause the video. 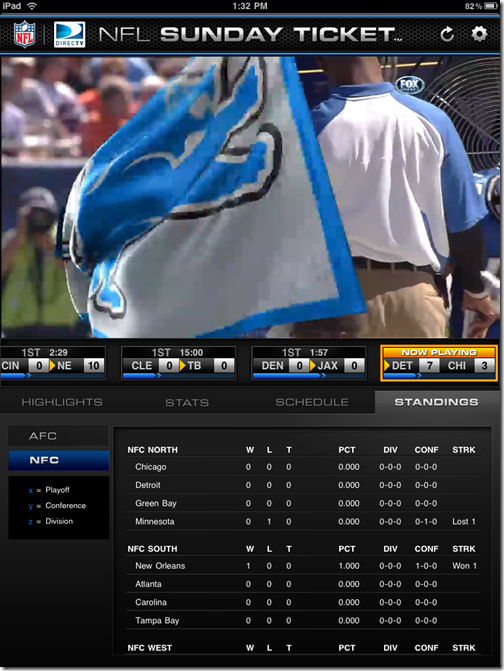 Below the video in the main screen are four tabs (see below). There are Highlights of the currently selected game. There are also stats for the Game, for Scoring or for Players. The Schedule tab shows either the schedule of a team you select from the drop down list or the weekly schedule of every game in the NFL. Finally there is the Standings tab which shows the standings for every division in the NFL. These are best viewed when the iPad is in portrait mode as in the shot above. 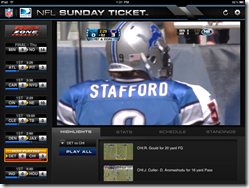 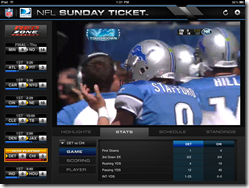 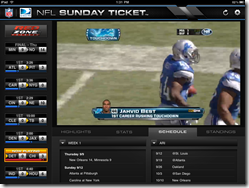 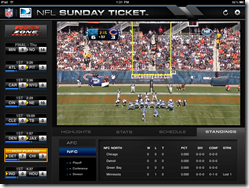 One of the best parts of the app for football fans who want to keep track of all the games at once is the NFL Red Zone Channel. In football, the red zone is the twenty yard zone closest to the end zone and when a team is in this area they say they are in the red zone and close to potentially scoring. The channel is the top channel on the left hand side and it shows the video of games whenever one of the teams is in the red zone. It also shows highlights of games if no team is in the red zone. When selected, the tabs below the video are not specific to just one game, but show highlights and stats for the whole NFL.

For the NFL fan who already subscribes to the NFL Sunday Ticket, there is no reason not to download the app since it is free. It is not perfect as it does freeze and sometimes the video quality goes way down. Over a slow Internet connection it will be unbearable to watch. And during the Detroit Lions-Chicago Bears game on week one, I noticed the audio kept cutting out for a second every two or three seconds. The refresh button in the upper right doesn’t seem to do much of anything even in these cases. The solution to audio and even video problems was to switch away from that specific game by tapping an other game in the column on the left. The go back to the chosen game. Due to this unreliability, don’t rely on this app if you have to see a game. But if you are mobile and want to watch a game, the app will work most of the time to help fans keep track of a game while working, hanging out at the mall while your spouse shops, or traveling.

Another annoying thing about the NFL Sunday Ticket in general is that after paying $350 for the Sunday Ticket and the mobile package, you still have to watch commercials (see the Pizza Hut ad below). I used to subscribe to the NASCAR package that let you keep track of the driver’s in car audio and would follow one car the whole race. It let you silence the commercials and only listen to the in-car audio of the driver and his crew while watching on your satellite receiver.  For $350 DirecTV and the NFL should do something similar. 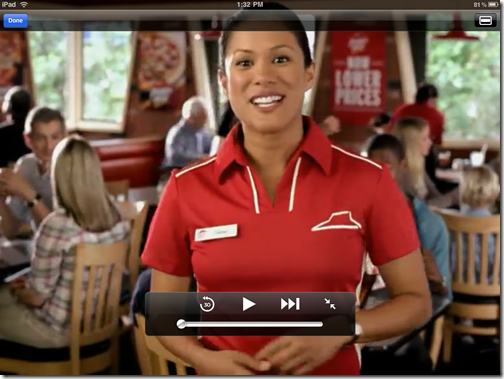 The app will also only work on one device at a time. So if a customer has both an iPad and an iPhone, the app will not work on each device simultaneously. The second device to log in will not work. There is no way to overcome this, even if a user wanted to pay DirecTV a second $50 fee.

Finally, I tested the ability to pause for a long time. The first day of the season was September 12. As a pastor of a Baptist church we have worship services at 6:00 pm Eastern. My favorite team played at 4:30 so I was going to miss the second half of the game. Normally I just record it and watch the end after services. But on this day we had planned to have a football party of the mens group in our church. I would not be able to avoid hearing the final score of the game before watching the recording of the game. My hope was that I could just pause the game on my iPad, go to church with it and hit play when the service was over. I tested it with a game that afternoon. Instead of pausing for an hour, it just dropped the feed. I’m not sure how long you can pause the game for before it  drops, but it is less than an hour.

The NFL has been exclusively tied to DirecTV for a long time with the Sunday Ticket. I’ve held out for a long time, but watching my team on Sunday is more important than the drawbacks of the satellite service. It is time, however, for the NFL to join baseball in having an iPad only subscription service for all the games. I would gladly pay if they would do that if the app had the following:

Some of these are part of the Major League Baseball app. All of the major sports just need to clone the baseball app for their sport.