Apple has just announced a collection of updates for the MacBook Air notebooks, and we expected to hear about a new MacBook, but Apple has killed off the hallmark white MacBook. 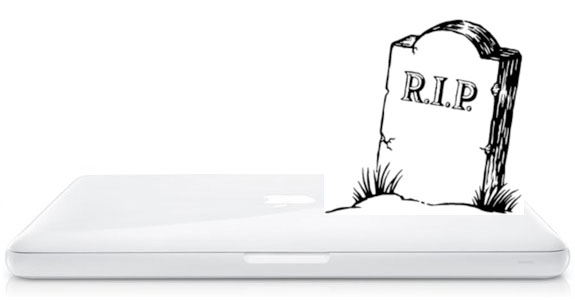 Apple delivered the pink slip to the aging MacBook today when the company announced new processors and Thunderbolt connectivity for the MacBook Air notebooks. The white MacBook has not seen an update in over a year, and we have wondered if Apple was just waiting for the right time to cut the bulky notebook from the company’s svelte aluminum lineup.

If you are looking for a new Mac notebook, the Air is now your new choice. With the newer processors and Thunderbolt connectivity, the 11.6″ MacBook Air is a good deal and should pack enough power for most students. That said, the small hard drive in the base model will take some getting used to. The base MacBook Air has a 64GB drive, as opposed to the 320GB hard drive found in the White MacBook.

If we were buying today, we would get the MacBook Air over the MacBook. We would also add an external hard drive and a monitor to keep at our desk.

What do you think of the death of the MacBook?