Windows 7 Service Pack 1 Now Ready for Download: What You Need to Know

Unlike previous Service Packs, Windows 7 SP1 does not contain any major improvements; it’s basically a rollup of updates that have been released for the operating system since it went to manufacturing July 22nd 2009. If you have been diligently updating your computer through Windows Update since then, you basically have most of what SP1 has to offer. 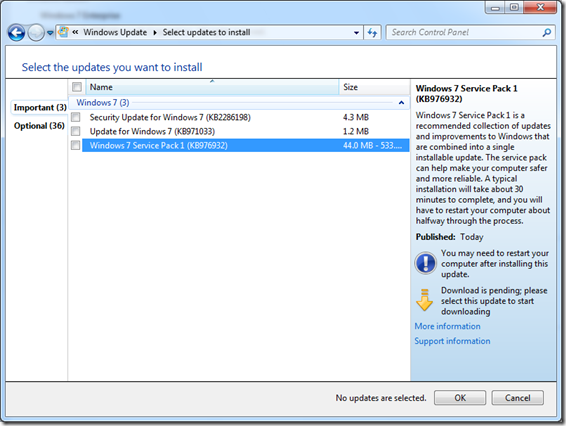 Windows 7 SP1 is provided in two ways, either as a full .ISO file download weighing in at 2 GBs or as an update available through Windows Update. The .ISO file contains SP1 code for different processor architectures such as x86, x86-x64 and Itanium systems. There are separate downloads which are much smaller for 64 and 32 bit installations of Windows 7. So if you don’t have a mixture of Windows 7 architectures to update, you can download just the one you need.

Windows 7 and Windows Server 2008 R2 SP1 helps keep your PCs and servers on the latest support level. It also provides ongoing improvements to the Windows Operating System (OS), by including previous updates delivered over Windows Update as well as continuing incremental updates to the Windows 7 and Windows Server 2008 R2 platforms based on customer and partner feedback. This enables organizations to deploy a single set of updates.

Do not click download if you are updating just one computer: A smaller, more appropriate download is now available on Windows Update. The best way to ensure you get Windows 7 and Windows Server 2008 R2 SP1 is by turning on the Automatic Updates feature. You can use our step-by-step instructions or, if you prefer, let us do it for you. If Windows Update is not offering you the option to install the service pack, see KB 2498452. If you are encountering a problem when installing the service pack from Windows update, see Troubleshoot problems installing a service pack for Windows 7 or Windows Server 2008 R2.

Whichever method you choose, check out the Notebooks.com article for some tips to ensure a smooth installation of Windows 7 Service Pack 1.