What is ThunderBolt and What Can You do with it?

The short answer is that ThunderBolt, formerly called Light Peak, allows you to transfer data really, really fast and can support multiple connection types such as a hard drive and a monitor. You can even daisy chain these items together — connecting your new MacBook Pro or Thunderbolt enabled computer to an external hard drive and connect that external hard drive to your monitor — allowing you to transfer files and play HD content at the same time.

You can see a demo of ThunderBolt, which is the technology powering Apple’s new Thunderbolt connectivity, in the video below showing off the scenario described above.

It will take a little time, but expect to see many new accessories and external hard drives coming out that work on ThunderBolt; especially with Apple on board. Intel describes the capability of Thunderbolt,

“PCI Express has the flexibility to connect to almost any type of device, and DisplayPort can drive greater than 1080p resolution displays and up to eight channels of audio simultaneously. Thunderbolt technology is compatible with existing DisplayPort displays and adapters. All Thunderbolt technology devices share a common connector, and let individuals simply daisy-chain their devices one after another, connected by electrical or optical cables.”

Here’s another look at how ThunderBolt could be used in a professional setting.

ThunderBolt carries the common DisplayPort and PCI Express protocols on the same cable which can lead to fewer cables in your current setup and faster data transfer for storage and display applications. 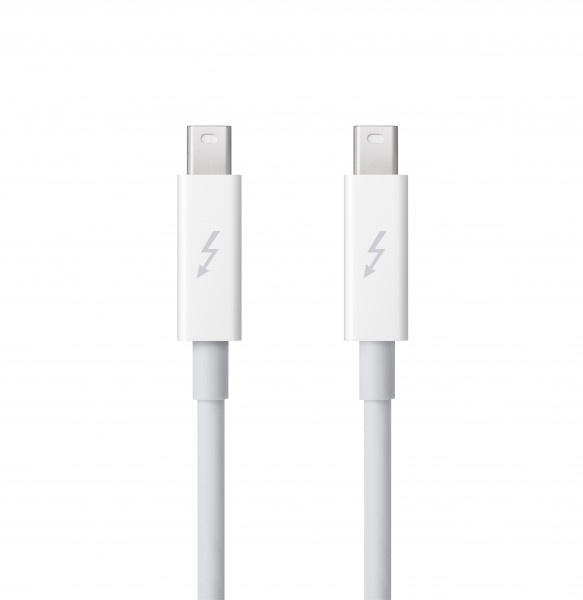 One of the big implications of this new technology is that thin and light laptops can get smaller and still allow users to use and connect an array of accessories. Say your new MacBook Air with Thunderbolt only has a single Thunderbolt connection.