The AT&T Mobile Hotspot MiFi 2372 is a fast mobile broadband router for users on the go. We tested it out and found that it is a fast, convenient tool. But is it worth the expensive monthly fee that comes with it? 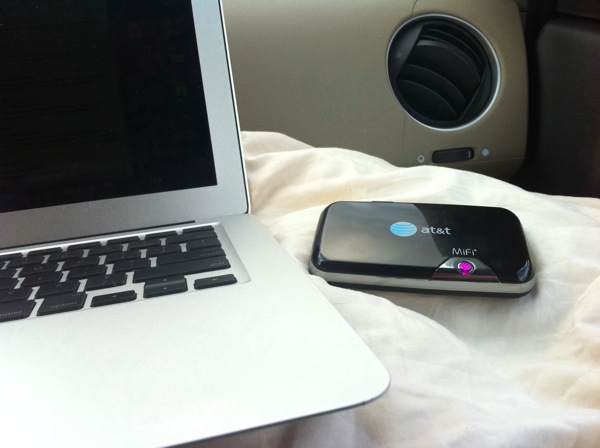 We have been touting the value of the various Novatel Wireless MiFi devices for a while. They are convenient to use, lightweight, and make getting online a breeze so long as you can find a cellular signal. The AT&T version is a Novatel MiFi 2372. It currently has a price of $299.99 without a contract, but that drops down to just $49.99 (with a $100 instant rebate) for new customers or those eligible for an upgrade or adding a new line.

What sets this model apart from the older version of the MiFi that one might find with Verizon or other carriers (the Novatel 2200 model) is this one is shaped a little different with rounded corners and edges, has built-in GPS, and a slot for a micro-SD card with support for up to 32GB. These last two additions are great for mobile users.

The GPS works via the landing page accessible by connecting the computer to the Wi-Fi signal and then typing the IP address into the address bar of a browser. The primary landing page will show if a GPS signal has been found. In the upper right there are a number of icons. In the image below you can see the battery icon, the Wi-Fi signal icon, and next that is the GPS signal icon. When fully blue, it shows a GPS lock. 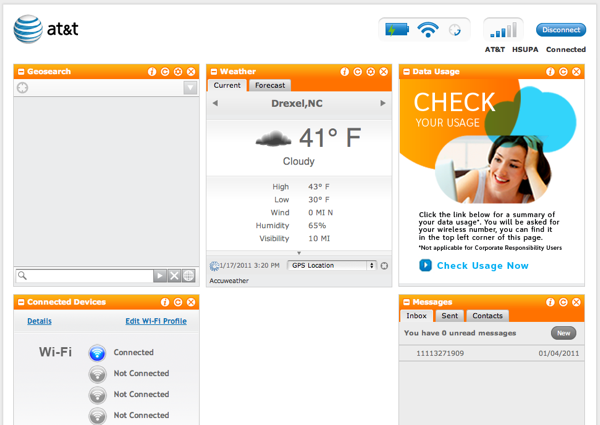 The benefit of the GPS is that you can quickly locate yourself on a map  and show local weather. The above image didn’t have a map because we didn’t have a GPS signal as we took the shot. This was helpful when we hit a traffic jam on a recent trip. I quickly found an alternate route and we saved a lot of time and gas by avoiding traffic. 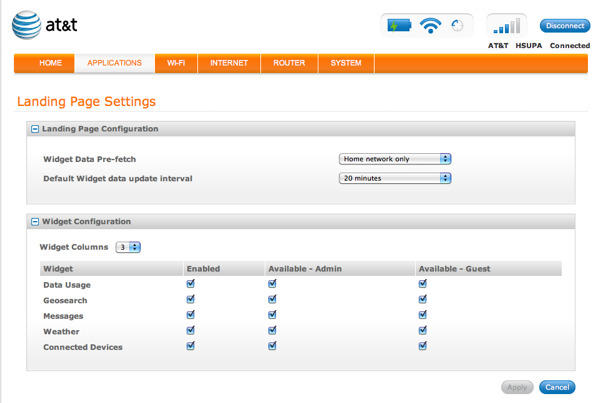 There are a number of settings, but we wish that there was a place to turn on/off the Wi-Fi signal even when it is hooked up to a USB port. Also we had to change a setting to get the GPS to work properly. The AT&T version of the Mi-Fi also does not allow you to download the configuration file so you can edit it to make the Wi-Fi radio stay on all the time, even when tethered to USB. The 2200 does allow for that. 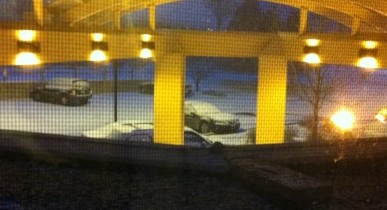 The AT&T Mi-Fi is a great tool when you have a good 3G signal. The Wi-Fi signal is also quite strong. I left the MiFi in my car one night while on a trip and was able to get a signal from my hotel room on the second floor about a hundred feet from the car (see image right). This was handy since the hotel Wi-Fi was very weak.

Also, in my comparison, the AT&T network is just faster than the Verizon version. Of course your results will vary, but most of the time the AT&T has worked better. On a long trip, there were only a few spots where the AT&T version had a slower speed than the Verizon. Our download rates were often 2 to 3 times faster on AT&T.

Being able to get online quickly is a real plus. The size and usefulness of this device makes it an excellent tool for anyone who is away from home or the office very much. 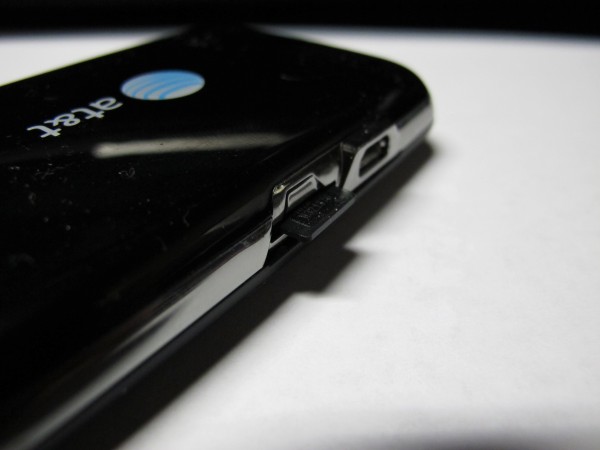 The micro-SD storage might be useful if you want to offload some files from a computer with a small hard drive or for sharing files among co-workers, family members or just friends all using the Mi-Fi. It works and there is not much else to say about it.

Sadly, the single biggest weakness with the older MiFi is still present – just four hours use on a single charge. In the days of 2-3 hours of battery life for a notebook computer, that was fine. But now that we are seeing systems with 5-10 hours, that is dismal. As I said in my first look video, I would rather the Mi-Fi be about $50 more and twice as thick with double the battery life. To overcome this we got a auto-USB adapter to provide power whenever the MiFi is in the car. It worked with the Verizon MiFi 2200 and with this newer AT&T version.

Another glaring weakness still present is the Wi-Fi signal of the MiFi cannot be used while tethered to a computer via USB. The mobile Wi-Fi feature turns off. The only way to fix that on the AT&T version is to hack the cable by cutting the data wires.

A special USB cable that comes with some external hard drives can also be used. The cable will have a pair of full sized USB connectors on one end and a micro-USB connector on the other. To use the MiFi as a USB modem, with the software that is built-in, just plug in the data part of the USB-Y cable. But when you want to just charge the MiFi with your computer’s USB port, plug in the power connector of the USB-Y cable and it will still work as a Wi-Fi router. Be sure to get the kind with a micro-USB and not the mini-USB port, as they are different. 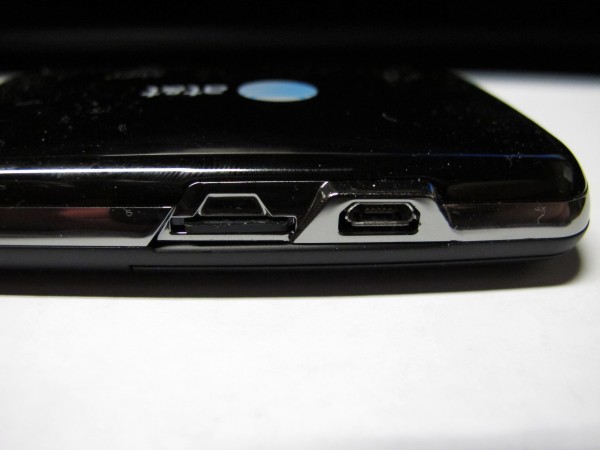 Not letting the MiFi work as a Wi-Fi router while tethered with the included cable is a huge oversight that we cannot even explain. Why would they intentionally make it work like this? And closing the simple configuration hack that was possible on the 2200 (but now closed with a recent firmware update) shows they clearly do not want this done. We cannot imagine why. 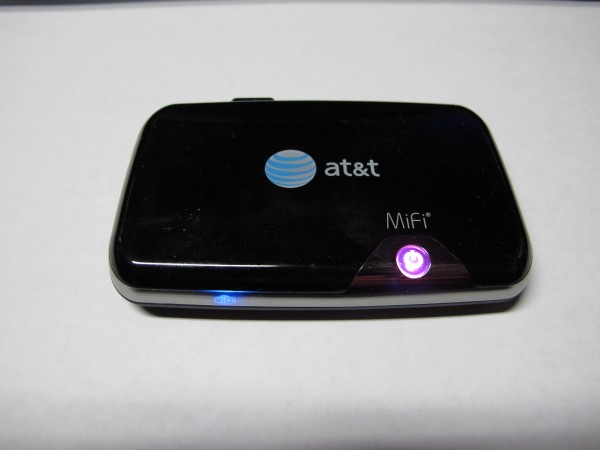 The data plans that come with the AT&T MiFi are pretty expensive. For a paltry 200MB the charge is $35. That is just plain ridiculous. Their 5GB plan, which should be plenty for most people, is still a whopping $51. It was $60 when I signed up just a few weeks ago, so this is a price reduction. That is a lot for an extra Internet account. So be sure you really need it before signing up for a new 2-year contract.

Sadly, the included software that is supposed to allow users to connect the MiFi as a USB modem does not work with a Mac. It does work with Windows. This would not be a real problem except that they don’t let you charge the MiFi while it is plugged into a USB port with the included cable.

Finally, we wish that the MiFi had better notifications than the two LEDs. There is one for the Wi-Fi signal. It is a solid blue when Wi-Fi is available and flashing when it is in use. The power button is also a light. It flashes different colors depending on whether it is on, has a 3G signal, an EDGE (slower) signal, or there is an error. It also indicates battery life is getting low when it flashes red.

We wish that it had a signal meter that showed how strong the 3G/EDGE signal was and another meter showing how much battery life was left. This information is available on the landing page described above. But it would not have added that much expense to have physical LEDs for both signals on the underside. A physical power switch would be nice too. The power button gets depressed while in a computer bag and sometimes the Mi-Fi has been on when we didn’t want it on, leaving our battery dead when it was needed.

Many of these issues are being addressed in the new 3G/4G LTE MiFi units coming to Sprint and Verizon.

The MiFi, regardless of whether you get it from Verizon, Sprint, or AT&T is a great tool. Despite its weaknesses, the upside makes it worth the expense for mobile Internet users. As you can see below there are a lot of weaknesses, but this is one of the few times that even with many shortcomings we still recommend the device, especially for people who need to work while away from home.

Many phones are now able to offer Wi-Fi tethering so make sure yours doesn’t before signing up for a new 2-year commitment. With the Apple iPhone possibly adding this support on AT&T we might be returning this one. But if that is not possible with your smart phone and you use the Internet on the go a lot, then we recommend a MiFi.

Is the AT&T version better than the Verizon or Sprint MiFi 2200? Not enough to switch carriers for. But if you are already an AT&T customer, now you have a great option with some nice added features like GPS and SD storage.