The Samsung SyncMaster P2350 is a 23″ HD monitor that offers looks and performance for a great price. Samsung provided us with a review unit for the past 30 days which gave us the opportunity to see how the budget priced monitor handles all types of tasks. The P2350 may be budget priced at around $200, but it delivers a high quality display with a high contrast ratio, fast response time and looks good too.

Who is this monitor for?

Given it’s price and performance, the P2350 is perfect for anyone from officeworker to student. Thanks to a fast response time and several easy to flip settings the screen can quickly be tweaked to tackle anything from spreadsheets to movies and games. Webworkers who spend their day inside the browser will especially appreciate the ability to instantly switch to an “Internet” mode that lowers the brightness and makes text and webwork easier on the eyes.

The P2350 is a snap too put together and get connected since it comes with a VGA and DVI cable. The base comes in two pieces which screw together and then snap into the monitor. Teh base does not adjust up or down like some monitors do, but it does tilt forward and back to allow users to locate a comfortable viewing angle. We should also note that the monitor does not swivel as some do, but the stand is sturdy enough that it is easy to turn the entire display if need be. This monitor is part of the Touch of Color line from Samsung which also gives it good looks thanks to a Rose Black finish that allows red to bleed through in certain lighting conditions for a classy finish. The small glass beveled edge adds to the beauty of this budget display. The Power, VGA and DVI connections are easy to access but a HDMI port is noticeably missing. While you can get a HDMI to DVI adapter for notebook connections it would have been a big plus to find a HDMI connection on the P2350.

Monitor settings are primarily changed using a touch panel on the lower right corner of the monitor which pulls up an on-screen display of settings. These settings allow you to change individual monitor settings to achieve a better image and calibrate the monitor if your work requires a fine tuned color palette. Just as most consumers won’t touch the settings on their HDTV, many don’t know where to begin when making adjustments to their monitor which is why the inclusion of 6 MagicBright settings are very helpful. With a few taps, you can tweak the monitor to offer the best settings for , Text, Internet, Game, Sport, Movie and Dynamic Contrast as well as customize all of the settings yourself.

For the first several weeks of our review the P2350 replaced a 17″ monitor in my office which is commonly used for 9 hours a day at a minimum working with spreadsheets, database programs, outlook and reading on the web. The upgrade in size alone was a major benefit to productivity allowing me to bring several documents on the same screen and work between them much easier than I could previously even though I was already using two monitors. With Windows 7 Snap I could keep the database I manage on one side and the student database on the other without sacrificing readability in either app. The ability to tweak the display to offer a less bright backlit instantly was a relief for the long time spent in front of the monitor. While the Internet or Text setting dimmed the display it was still brighter and nicer to use than the standard display I had at work. Since the settings are easy to change I could swap between a work optimized mode and a more Hulu friendly movie mode when lunch time rolled around.

As mentioned, a few taps on the menu options and you can change from work to play. To see how well the SyncMaster P2350 handles entertaining you, we watched movies, played games and caught up on a TV show with Hulu. For movies and TV shows the P2350 was great. Watching The Dark Knight proved a wonderful experience with black blacks and vibrant explosions. The only thing that detracted from the experience if you got too close to the monitor was a bit of backlight bleeding along the bottom of the monitor. That said, if you leaned back and watched the movie from a relaxing position it was less noticable. Given the price, and the rest of the features it didn’t detract from the overall quality of the monitor for me, but for those of you who are picky about your video you should keep that in mind. For gaming I loaded up a Far Cry 2 Demo and blasted my way through the beach without noticing any ghosting or issues to note.

For the price the Samsung P2350 monitor is an incredible value. The large display, easy to configure settings and good looks combined with the low-cost when compared to other 23″ monitors makes the P2350 a standout display. Even with the few shortcomings we found, the SyncMaster P2350 is a good display and one worth considering for any setting from home, to work to a dorm room. 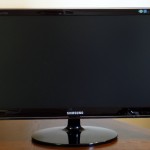 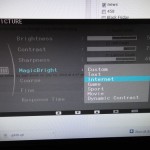 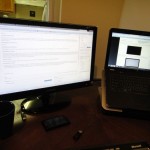 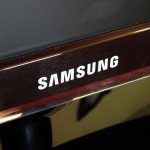 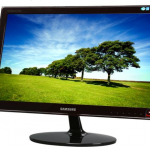 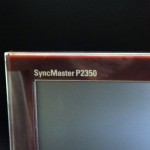