One of the earliest consumer 2-in-1 laptops to run Microsoft’s new Windows 10 operating system comes from Toshiba. The Toshiba Satellite E45W-C4200X features a 14-inch multi-touch display and an above average keyboard. However, it’s a budget notebook that comes with a few compromises. Is it worth consideration for buyers looking for a budget-friendly Windows 10 2-in-1 machine? 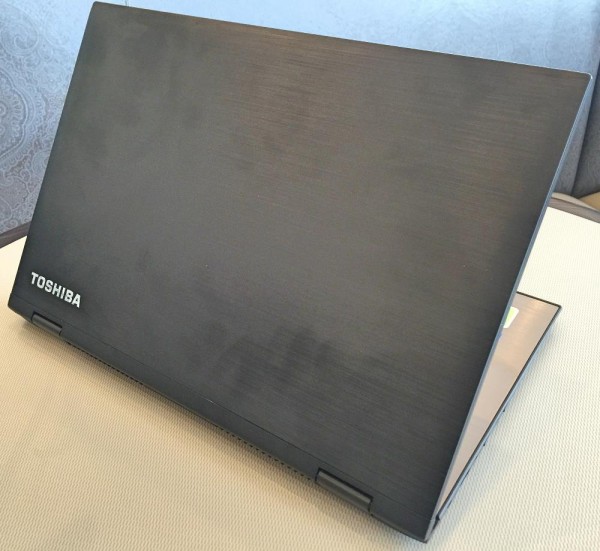 At first glance the Toshiba Satellite E45W series looks like a traditional consumer class laptop with a 14-inch screen. Then we bend the screen back and it keeps going nearly 360 degrees to turn the laptop into a heavy 14-inch tablet.

The design looks nice with an almost smooth brushed aluminum finish around the keyboard and clickable touchpad. A wide black bezel surrounds the 14-inch 720p screen. A set of Harmon/Kardon speakers rests between the function keys and the screen’s hinges. The black lid comes with a textured brushed metallic look and feel. The bottom matches the lid. The base of the laptop tapers at the edges. 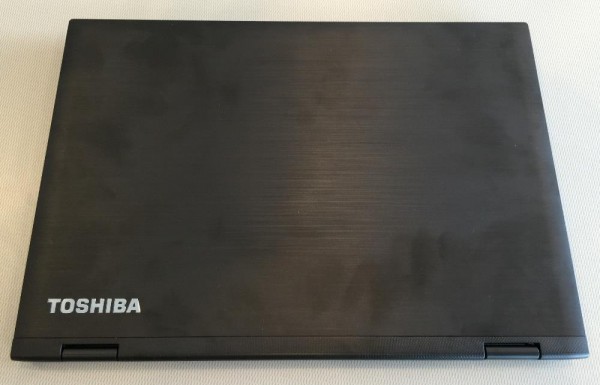 On the right edge are the following ports and buttons from front to back:

The left side features: 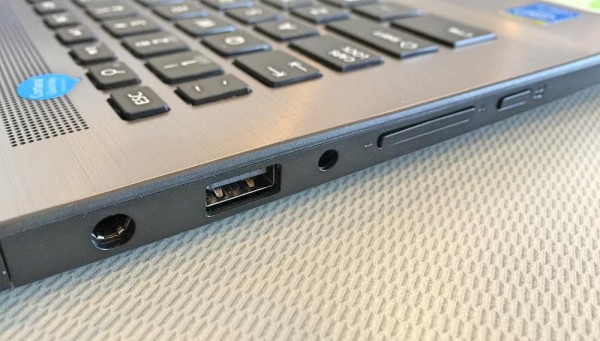 The volume rocker suffers from a strange design problem for those who plan to use the Toshiba Satellite E45W-C4200X in Laptop Mode most of the time. The rocker is backwards. In laptop mode the part of the button towards the back lowers volume instead raising it. In Tablet, Audience or Presentation modes it behaves as expected with the up volume on top and down volume on bottom. 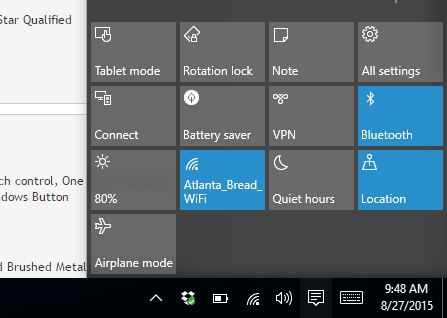 Windows 10 includes something called the Action Center in the lower right corner. Click or tap on the icon that looks like a quote bubble to open it or swipe in from the right edge of the screen. You’ll need this when using the computer in modes that situate the screen upside down, like Tablet Mode or Audience Mode. The screen doesn’t automatically rotate because the Rotation Lock comes turned on by default. Put the computer in one of the modes where the screen needs to rotate and turn off the lock by tapping Rotation Lock in the Action Center.

Most consumer laptops come with glossy screens. They look brighter under normal or low light, but in bright light or outdoors they’re difficult to see. 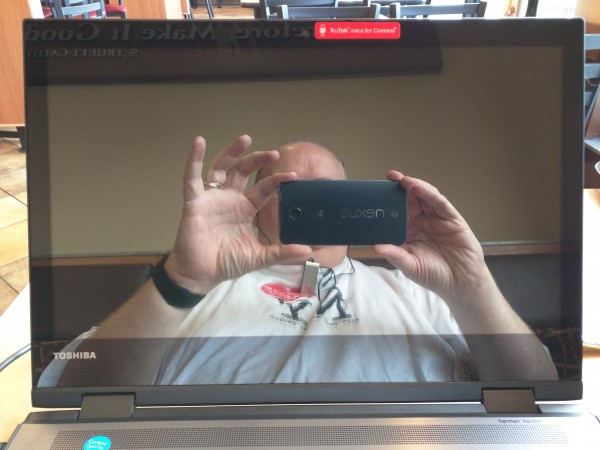 The above image looks like a mirror instead of a laptop screen. It’s not as bad when the screen is turned on, but under normal light I had to bump brightness to 75% to read the screen, reducing battery life. Fortunately the computer comes with good battery life to compensate. 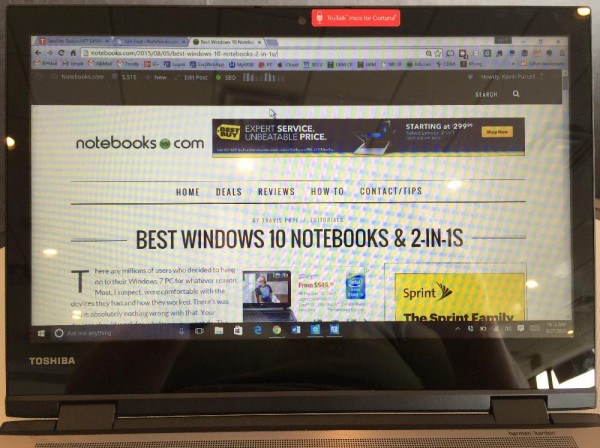 Because of the highly reflective coating, viewing the display at wide angles proves difficult. At most, two to three people can view the screen at a time. Toshiba made a personal computer with emphasis on personal, meaning it’s not a great option for business users who will show off presentations to a couple of clients at the same time.

The screen colors look good and text is sharp enough for working on a school paper, a report for work or just firing off email or social network posts. Streaming video also looks good.

We’ve tested better keyboards, but typists can comfortably compose their text on the E45W. The island style key spacing makes for a fast typing experience. The function keys along the top hold the typical shortcuts like media control, volume, Wi-Fi, screen brightness plus a dedicated Cortana Search key for pre-installed Windows 10. The key travel isn’t great and serious typists will want to look elsewhere. 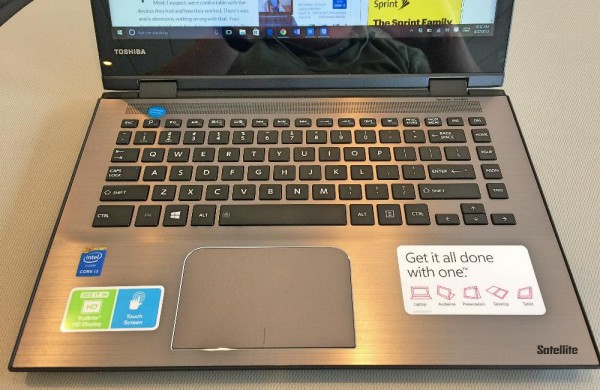 Along the right edge we find the typical Home, Page Up/Down and End keys. Business computers come with better keyboards, but for a consumer notebook computer, it’s decent. Backlighting would make it better. 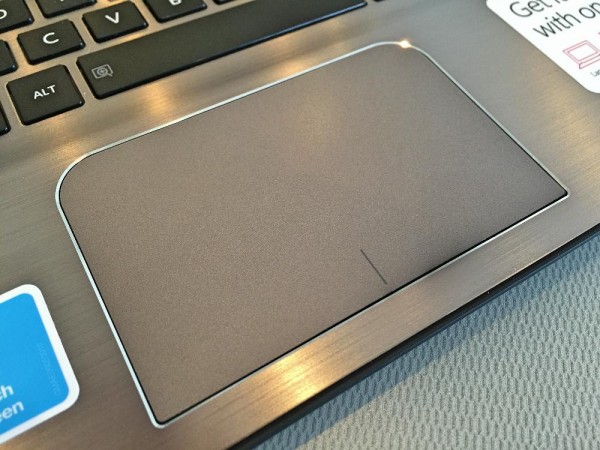 The trackpad is another matter. It’s not as large as better touchpads or trackpads, but it’s not as small as some. It’s a clickable trackpad, but the lower third of the surface area works as left and right mouse buttons. If you prefer to click instead of tap, you’ll repeatedly right-click accidentally. It got so frustrating, that I connected a Bluetooth mouse and turned off the trackpad. Despite the right/left button placement, the touchpad is responsive without too many accidental clicks while typing. 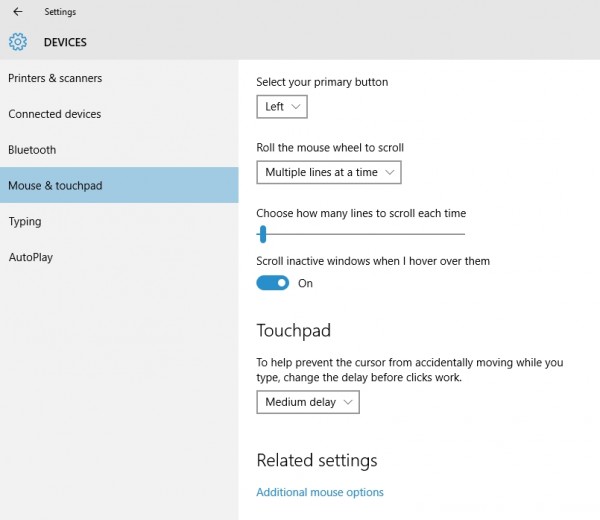 To turn off the trackpad automatically when connecting a mouse, open settings from the Action Center by swiping in the right edge of the touchscreen or by clicking the quote bubble icon in the lower right corner of the screen. Click on All Settings and then Devices. Now choose Mouse & touchpad. Click on the link at the bottom of the page that reads Additional mouse settings.

This opens the Control Panel mouse settings box. Select the Device Settings tab and click to put a check mark in the box besides the line that reads Disable internal pointing device when external USB pointing device is attached. This also disables it when a Bluetooth mouse connects. 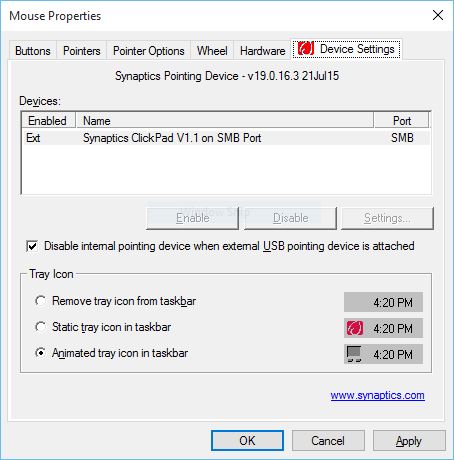 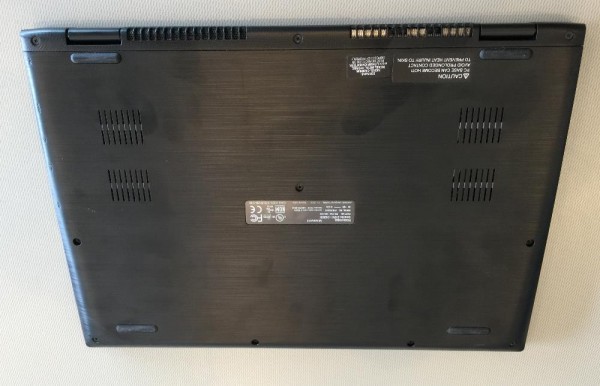 The Intel Core i3-5015U processor and 6GB of RAM provides enough power and performance for average tasks. It comes with integrated Intel graphics, so don’t plan to play a lot of games or do other graphically intensive things. It’s sufficient for casual gaming and streaming Internet video as well. However, it works great for typical computing functions like surfing the Internet or working on documents, presentations and other office work.

The Harmon/Kardon speakers give users a little better than average sound compared to most laptop sound. Placed just behind the keyboard, they give enough volume even in moderately noisy settings. Plug in headphones or ear buds for the best sound.

The Toshiba Satellite E45W-C4200X 3 cell/45 Wh Lithium Ion battery performs well. At 50% screen brightness it usually lasts a good 6 hours with a Bluetooth mouse connected. Turn off Bluetooth to get more battery life. Bumping the screen brightness in bright rooms, something many users will need to do thanks to the reflective screen, runs the battery down faster. Toshiba optimistically promises 8 hours. It never lasted that long in real-world usage.

Running Windows 10 and Other Software 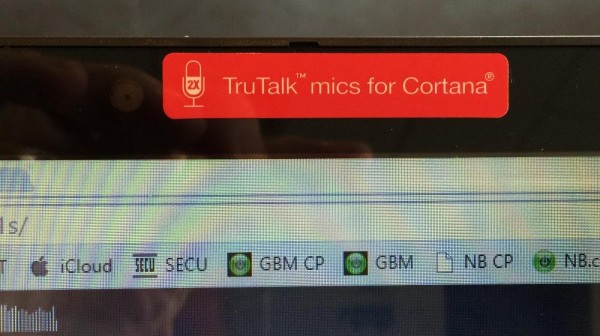 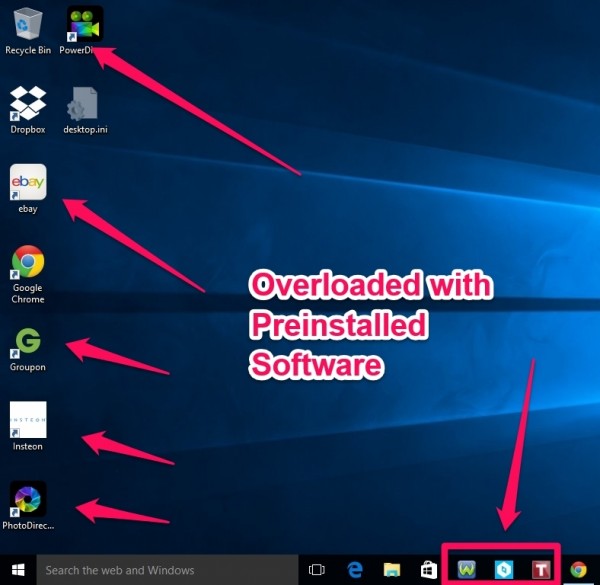 Unfortunately, Toshiba loads up their computers with a lot of crapware. McAfee security software is terrible, so I always uninstall it and pick another security solution like Windows Defender. 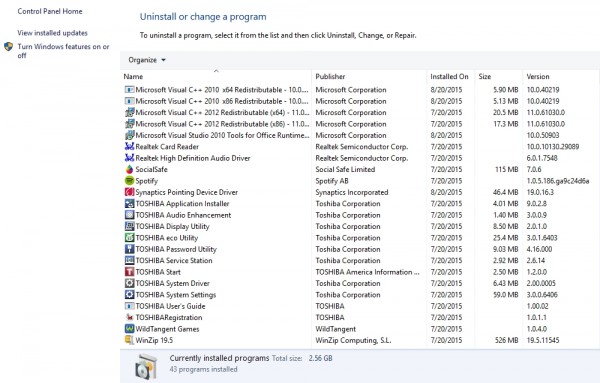 Either run PC Decrapifier to remove junk or get rid of it yourself. Right-click on the Start button in the lower left corner and click on Programs and Features at the top of the pop up menu. This shows all the installed software (see above). Uninstall programs you don’t need by selecting the program in the list and then clicking on Uninstall from the bar above the list.

Is the Toshiba Satellite E45W-C4200X Worth Buying?

One can view model specs at the Toshiba Satellite E45W-C4200X at Toshiba’s site, but buyers will need to get one from retail stores like Best Buy, where it’s $500, since Toshiba doesn’t sell this model directly.

The $500 price seems fair for this computer. It’s got some weaknesses. People who use their computer in bright light or want more than half a day of battery life will need to pay more and look elsewhere. However, most students, business users or home users with modest needs can enjoy using the Toshiba Satellite E45W-C4200X and save some money over higher quality machines. The computer looks pricier than it is and seems like a classy system, so users won’t feel embarrassed opening it up at the local coffee shop or their college library.

Toshiba priced this system low enough that some price conscious buyers will want to take a look. People who want a little more than a budget laptop, but doesn’t cost too much more, will enjoy this computer. So we’ll call it a “buy,” with reservations. If Toshiba boosted the screen brightness and put a longer lasting battery in it, we’d like it more. Those who need to use the trackpad will find the included pointing device frustrating, so get a Bluetooth mouse to use instead. 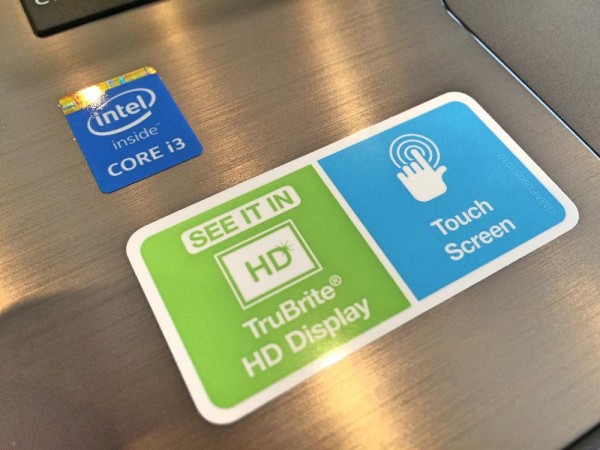 The Toshiba Satellite E45W-C4200X comes with the following specs.