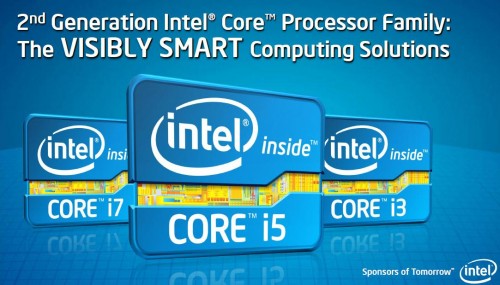 One of the ways that the new Core i processors will benefit consumers right away is in the are of video transcoding, or as you may know it converting video for playback on a portable device like the iPod or iPad. With the new “Visibly Smart” processors consumers will have access to Intel Quick Sync Video which can convert a four minute video for playback on the iPod in 16 seconds.

In this example Intel used CyberLink MediaEspesso 6 to render a 1080P HD MPEG2 video to a 640 x 360 H.264 file for playback on the iPod Touch. In order to achieve this new speed, which taps into the hardware, software tools need to be coded to take advantage of the improvements. Intel told us that tools from Arcsoft, Cyberlink and Corel are ready to use the new tools.

Other improvements in the area of video will include a better video editing experience which should involve less waiting for consumers with Intel AVX and even mainstream gaming. We expect to see a demonstration of this cap[ability at CES 2011 using Valve’s upcoming Portal 2. The gaming and viewing experience will make use of Intel Clear Video to provide better visuals and color fidelity.

Another big feature is Intel WiDi 2.0 and Intel Insider. Intel WiDi 2.0 brings many improvements to Intel Wireless Display which allows users to stream HD content to their HDTV without any wires. The new version of Wireless Display offers 1080P HD streaming and Intel Insider which will give users access to full HD video downloads the same day as DVD with titles like Inception available later in 2011.

The first notebooks to have the Second Generation Core i processors will come with the Quad-Core processors in the coming weeks and the dual-core Intel Core i Series processors will hit laptops in the February time frame.  If you are looking for a new laptop right now, be sure you’re getting a great deal or you may want to hold off until the latest technology hits store shelves in February to March.