Think whatever you will about Steve Jobs, and Apple’s obsession with avoiding Flash, but the numbers don’t lie. At the root of the battle for what plays our movies and serves our ads is the claim that Flash isn’t good for mobile devices because it hurts their battery life.

We saw this first on the iPhone and the iPad and most recently on the MacBook Air which is shipped without Flash built in. Apple claimed the absence of Flash was a decision made so that users could download the latest, and most secure, version of Flash when they get the device, but Ars Technica’s review of the MacBook Air 11.6″ shows that Flash can cut the battery life of the MacBook Air by up to 33% — just from serving ads on static webpages! 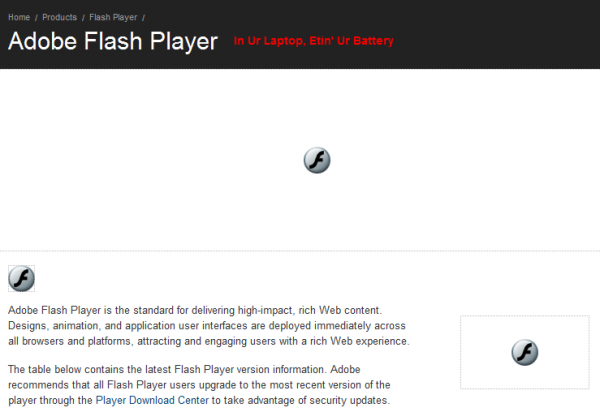 You heard that right, all those rich flashy, jumpy — annoying as hell slide-out ads — are killing your notebook’s battery. Simply removing Flash turns these battery sucking ads into static images that allow for a less distracting experience and better battery life.

From the Ars MacBook Air 11.6″ Review (emphasis ours):

“Having Flash installed can cut battery runtime considerably—as much as 33 percent in our testing. With a handful of websites loaded in Safari, Flash-based ads kept the CPU running far more than seemed necessary, and the best time I recorded with Flash installed was just 4 hours. After deleting Flash, however, the MacBook Air ran for 6:02—with the exact same set of websites reloaded in Safari, and with static ads replacing the CPU-sucking Flash versions.”

It’s amazing how big an affect Flash and ads can have on your battery life without playing video or Flash based games. It would be interesting to see how PC notebooks and netbooks battery life would change without Flash installed.

Perhaps instead of longing for better battery technology we should be knocking on Adobe’s door and asking for a version of Flash that doesn’t shave hours off of our devices’ battery life!

One thing’s clear. If Adobe wants Flash to stay a player in online content and ad delivery now that we are a mobile workforce the company needs to come to terms that we are no longer a desktop society with unlimited battery life and start optimizing Flash for use on battery powered devices.

If you want to disable Flash when you are on battery power you should check out our guide on How to Disable Flash in Chrome, Safari, Firefox and Internet Explorer.