iPhone 4 Charging: Which is Faster – AC or PC? 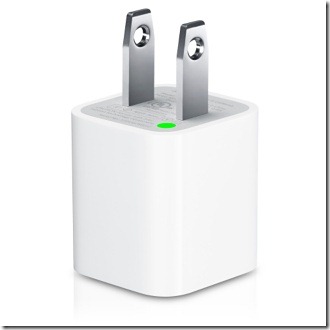 Which will charge your iPhone 4 faster – the phone plugged into the wall via the AC adapter or plugged into a USB port on your computer? Whenwillapple.com put the two charging solutions to the test and found that the AC adapter is faster, which is what one might expect. But how much faster?

The person doing the test started with a dead iPhone 4. He charged it with the included AC adapter and USB cable solution first, plugging it into a 120 Volt / 60 Hz plug. That is standard in US homes. For the USB charging solution test, he plugged the iPhone 4 into a late 2008 13″ aluminum MacBook.â€

During the charging cycles he turned the phone on to check the battery percentage for a quick 1-2 seconds. He did this every five minutes until the phone was fully charged and recorded the percentages. The screen on the iPhone was kept at the dimmest setting and Wi-Fi was turned off. However, 3G was active and turned on during the test.

There was minimal use of the phone during the test. However, the author did not feel that this adversely affected the test or skewed the results very much. It included a couple of text messages, a canceled phone call and one voice mail message notification, all during the test of the AC adapter. While testing the USB connection only 1 text message was received. So if anything the activity would have negatively affected the AC adapter test more than the USB adapter.

The results were charted on the following graph. 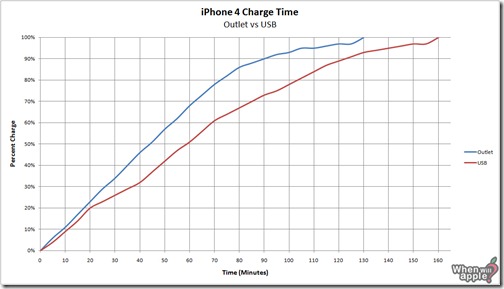 This test was done two years ago with an iPhone 3G and it took longer to charge the iPhone 4 than the 3G by a thirty minutes. That is not surprising given the much larger iPhone 4 battery.

If you are in a hurry, it is worth an extra five minutes to hunt down that AC adapter to charge your iPhone 4.