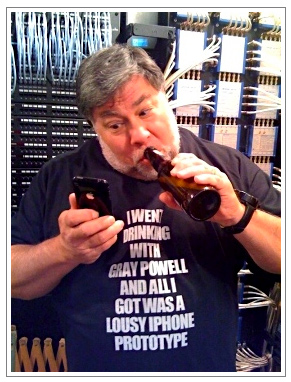 The iPhone protoype debacle has generated more media frenzy than almost any other story I can think of in recent memory.  Its just insane at this point.  Right now, its all down to legal issues, search warrants, REACT, and the California D.A.  But, lets add a little perspective from someone who knows, Steve Wozniak, Apple co-founder and generally nice guy.  He sent this letter over to Gizmodo:

***I don’t know anything for real about this iPhone issue, from Apple’s perspective.

Was the engineer not allowed to have this iPhone out of the secure areas? I don’t know.

Was he/she not allowed to use this iPhone outside and be seen with it? I don’t know.

It appears that no features, nothing that made it a new iPhone were shown to others, thankfully, by the engineer. The later analysis by Gizmodo has some interesting points but none that are total shockers.

I believe (and have heard) that the engineer who lost his iPhone 4G has not been fired. Perhaps the case was examined on an individual basis and determined not to have been one of violating Apple policy too much or not one where Apple was injured sufficiently. I’m glad for now. I hate to see people lose their jobs ever.

But I can tell you that the test engineer who showed me an iPad after midnight, for 2 minutes, during the iPad launch was indeed fired. I opted to spend 2 minutes with Numbers on this iPad, trying some stunts I’d seen on Apple’s website demo video. I was not told that it was a 3G model and I had no way to know that. I was told that this engineer had to wait until midnight to show it outside of Apple’s secure area. And I’m an Apple employee who he was showing it to. My guess is that he was allowed to take the iPad outside of the secure area but still not supposed to show it.

I myself never prod Apple friends into saying things about unreleased Apple products. I’m not in the group where early knowledge equates to value. I don’t play the rumor mill game. So I had little interest in seeing this iPad beyond a couple of minutes.

In my opinion, Apple was not hurt by my being shown this iPad. And if the employee who showed it to me believed that he could show it after April 3, then that’s another factor.

I did describe this to Steve Jobs the night of the iPad introduction and he said “so it’s no big deal.” We talked about family things after that for a short while. But that engineer did get fired. I’m sure that Apple HR told the engineer that it was because everyone in that same situation gets fired. Does that jive with this iPhone situation? What am I missing here?

Product secrecy is good for Apple and should be strictly enforced, but maybe 10% of niceness and 90% of strictness is OK too.

And you know what?  I think he makes the most sense out of anything I have read so far.  You?