The Gateway ID49C07u is a new Intel Core i3 powered notebook that is part of the new ID series from Gateway. It is a good fit mobile device for users who need a capable device without breaking the bank.

The Gateway ID49C07u is a good fit for most students, as well as home and office users, who don’t need a business class machine. The 14″ screen provides a large enough display to allow for side by side work without detracting from the overall portability of the device and at $579.99 the ID49 is a good fit budget wise for both students and home users. This specific notebook was purchased for use by my father who will be taking with him on sales calls and needs a reliable machine that can handle basic office and web tasks.

Overall,the Gateway ID49C07u‘s design is rather impressive, providing a look that is reminiscent of the MacBook Pro. This gives the notebook a classy, high-end look. The metal cover of this notebook feels nice and seems very durable. The outer cover has a small lip, which makes it easy to hold onto the notebook if it is being carried without a sleeve. At just an inch thick it maintains portability.

Note the lip on the left end.

The Gateway ID49C07u‘s display is very bright but there are two issues that detract from the overall quality of the screen.

First off, the picture seems to be a little washed out. It just seems like the colors aren’t quite as vibrant as they should be. This really isn’t an issue unless you plan on using the laptop for photo editing or print production, where you may require truer color. Many users may not notice the washed out colors, but if you are picky about your display you should visit Best Buy to check out the display yourself.

The other complaint is the glossy screen. Though it isn’t as bad as some glossy displays I have seen, you can clearly see the reflection of what is behind you. If you will be working in well-lit areas, such as outdoors, this could prove to be an issue. If you are bothered by glossy screens, but are still interested in this laptop, a simple $30 anti-glare film should help fix the glare.

The Gateway ID49C07u has a great, full-sized keyboard. Initially, it was a little difficult to get used to, due to the addition of the volume keys on the right side of the keyboard that shifted the position of many keys to the left a bit, but after some use the shift was easy to adjust to and did not impact typing. Located above the keyboard are touch sensitive media buttons as well as an eject button for the disk drive.

Trackpad glows when you touch below the lines.

When using the trackpad, I found it to be problematic at times. Sometimes the cursor would fly to the other side of the screen, or it wouldn’t move at all. These instances were very brief, but happened more often than one should expect. After adjusting the tracking speed, it worked a little better, but still had instances of erratic behavior.

The clicking feature also seemed a little stiff and double-clicking anything took a little bit of skill. This was remedied by lowering the double-click speed in preferences, but in the end I found it easier to just tap the trackpad instead of using the physical click. Overall, you may want to pick up a good mobile mouse to go along with this notebook.

With its Core i3 processor and 4GB of DDR3 RAM, the Gateway ID49C07u is a well equipped machine. Though we haven’t had a chance to do extensive testing, the ID49C07u handled working in office documents and web work without any trouble and, based on its specs, should be able to handle light photo and video editing.

Gateway claims that the Gateway ID49C07u will last up to 4 hours on a single charge. Our testing found that the battery lasts about as long as advertised, close to 4 hours, with the screen slightly dimmed and power saver settings turned on. The folks over at LAPTOP Magazine claimed that they also squeezed 4 hours and 3 minutes out of the ID49C07u. This is about 40 minutes shy of the thin and light average.

The sound on the Gateway ID49C07u is very impressive, thanks to the Dolby Home Theater v3 enhancement. Even turned all the way up, there was no distortion or tinny-ness from the built-in speakers. While it did lack a little bit of bass, the speakers sounded great for a notebook.

The GateWay ID49Co7u has 4 USB ports, a HDMI port, a VGA port, an Ethernet jack, headphone and microphone jacks, and an optical disk drive. Also, built into the front edge of the laptop is a multi-format card reader.

While there are some issues with the trackpad and display, our first impressions of the GateWay ID49Co7u are good. This notebook offers a good keyboard, nice looks, and an Intel Core i3 processor for a price that is hard to beat. 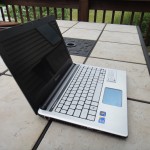 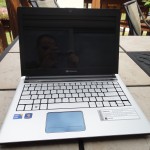 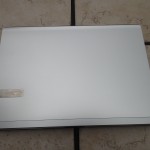 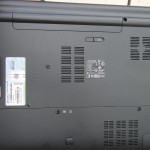 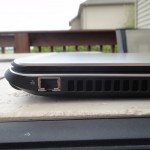 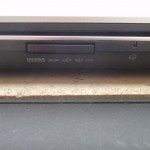 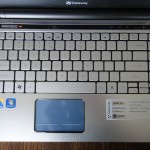 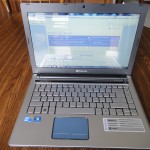 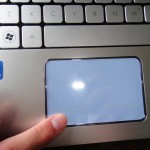 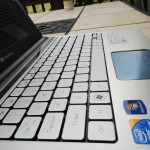 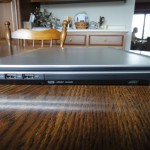 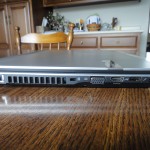