Laptop Magazine released their brand reviews of notebook computer manufacturers ranking nine builders based on a number of criteria. The top three were Apple, Lenovo and HP. The rankings were based on the following:

This is the second year straight that Apple has ranked first and Lenovo second in the listing. HP jumped up two slots to earn third.

The rankings are based on an average of the above list. When you look at the individual categories occasionally the rankings are shuffled. For example, Apple didn’t fare so well in the Value and Selection category, tied for dead last with Sony. Lenovo is said to have the best Keyboards/Touchpads. In every other category Apple was either first or tied for first. And in Laptop Magazine reviews the company was way out ahead of the competition by eight points over HP, which took second in that category. 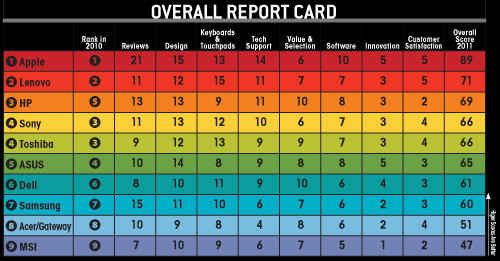 The methodology used to rank the companies included the above list of categories being given point values and totalled with some of them weighted more than others. Reviews by the magazine staff were worth 25 points of the overall score. Design, Keyboard/Touchpad, and Technical Support each were worth 15 points. Ten possible points were assigned to Value/Selection and Software. Innovation and Customer Satisfaction/Reliability were only worth 5 points each.

While we would agree with most of the weighting, the last one should be much higher. If people are, either not satisfied with the product, or it keeps breaking, then a manufacturer doesn’t deserve as high a ranking. HP was the third highest ranking manufacturer but was tied with MSI for last in this one category.

You can look into how each scored at the magazine’s site. They go into further detail about each manufacturer and why they scored like they did. For example, Apple ranked so high in the Reviews category because, of the five computers they reviewed, three were Editor’s Choices. All of them would be recommended. At the same time they said of MSI:

The past year hasn’t been great for MSI, as lackluster scores across the board prove. With underdeveloped tech support, mediocre reviews, and lackluster keyboards, the brand’s last-place ranking isn’t a huge surprise.