At CES 2011 Microsoft is showing off the Touch Mouse very much like the Apple Magic Mouse that we reviewed recently. The surface of the mouse has a touch sensor underneath and senses multi-finger gestures and touch in order to perform functions on-screen. 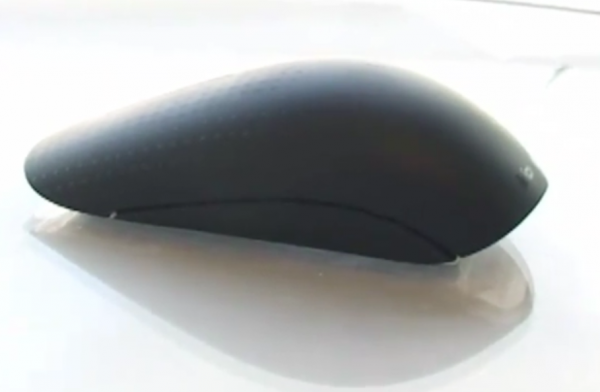 The mouse looks sleek with no buttons and it will work for both left and right handed people with just a configuration switch in the driver software. There are multiple gestures supported.

The goal of the company’s design team, which came up with the Touch Mouse, was to create something that would not drastically change the way a user will use the mouse, but have unique new features to make mousing better.

A person can still sit down and move it around to do normal pointing and tapping where a right and left button would be to perform right and left clicks. But as you move your finger over the surface of the mouse, which has tiny little X texture on it to let the user know where the sensor is, it does other functions, much like the Apple Magic Mouse.

Unlike the Magic Mouse the gestures on Microsoft’s Touch Mouse are very different, so Magic Mouse users will have to learn a new system of seven unique single finger gestures as well as gestures that include multiple fingers and the thumb. For example, back and forward gestures are performed by swiping the thumb on the side of the mouse.

The Microsoft Touch Mouse will be available in May but can be pre-ordered at Microsoft’s site or an Amazon. It will cost $79.95.