Foxconn announced yesterday at their annual shareholder meeting that the company is discontinuing its suicide compensation program. Foxconn management said the move is an effort to raise morale and decrease the number of suicde attempts.

Foxconn has been getting heat over the past few months due to poor working conditions. Until recently, factory  workers were being paid only $130 per month.

Efforts by both Foxconn and its clients, including industry leaders Apple, HP and Dell failed to solve concerns. After some investigation, Foxconn determined that offering the surviving family members the equivalent of 10 years worth of salary may have been a contributing factor in the cluster of suicides. Examples for this kind of reasoning were found in suicide letters such as one that in part read:

“…now I’m going to jump off Foxconn, really leaving now, but you don’t have to be sad, because Foxconn will pay a bit of money, this is all your son can repay you now.”

In addition to the discontinuation of the suicide compensation program, Foxconn is also handing its welfare management over to the Chinese government.

Foxconn has implemented a few programs, aside from the discontinued suicide compensation program, to improve employee morale and save those thinking of suicide. CEO, Terry Gou, claims that dozens of employee lives have been saved by its efforts, including hosting social events to keep employees happy. Also, employees were told to immediately inform the care center if they see any other employees crying. The care center has reportedly stepped in after receiving such reports and saved the lives of many depressed employees. 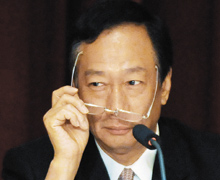 Also, Foxconn is planning to relocate some of its operations to plants in Taiwan or Vietnam. This is a surprising announcement due to the poor earnings forecast mostly due to increasing wages. However, Foxconn told reporters that “Improved Utilization, unit fixed costs may be reduced.” Relocation may be a move to turn those earnings forecasts around.