Today was the day of the big Apple iPad unveiling. Lot’s of speculation surrounded the release, but today all was made clear at the Apple event.

The iPad appears to be running a modified version of the iPhone OS, and it is capable of running all apps out of the existing app store. Apple’s plan seems to be to push the large number of iPhone apps as fully functional on the device until developers can create new iPad specific applications (the software kit enabling the creation of these new iPad specific apps was released to developers today so that they could begin work). Existing applications will run at their regular size on the iPad, or they can be enlarged and brought up to full screen. It is expected that they’ll run a bit faster than on the iPod Touch or iPhone because of the iPad’s 1GHz processor. I must say that it’ll be weird to use an application that was designed for a 3.5â€ iPhone screen after it’s been enlarged to the 9.7â€ iPad screen. Still, backward compatibility was absolutely necessary for the iPad. Apple wasn’t about to dump the vast number of existing applications and ask developers to start work on new apps for a new device with a relatively tiny audience (when compared to somewhere around 62 million iPhone’s and iPod Touches that are already on the market).

While the iPad does feature most of the sensors found on the iPhone (GPS, compass, accelerometer, etc.), it lacks a camera, which means it won’t be able to take advantage of all of the apps out there, despite being technically capable of running them.

The foundation of the interface will be very similar to the iPhone, right down the the homescreen layout, which displays applications in a grid with multiple pages that can be swiped through. Apple is finally allowing users to apply their own images to the background of the iPad, a simple customization that is oddly non-existent on the iPhone.

Continuing with the similarity to the iPhone, the iPad will rely on a large on-screen-keyboard (OSK) for text input. I was personally expecting Apple to come up with some innovative way of inputting text on the iPad, in order to make it more viable, but they didn’t deliver. I’d say that the iPad’s OSK is one of the biggest kinks in the iPad’s armor. The iPad won’t be usable on the go for text input unless you hold it with one hand and input text with a single finger, which will be mighty slow. Otherwise you’ll need to sit down with it somewhere in order to get both hands on the keyboard. It’ll be really interesting to see how a large but well implemented OSK will function; I have the feeling that it won’t be as effective, or as flexible as an OSK on a device that is small enough for thumb-typing (a la iPhone). 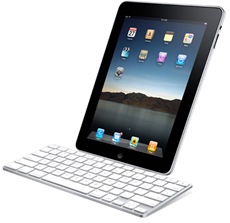 Apple must have anticipated this OSK weakness as they also announced two accessories to assist with typing. The first of which is a keyboard-dock, which is simply a charging dock for your iPad with a familiar Apple keyboard attached to it (I really hope that the keyboard is detachable, but it unfortunately doesn’t appear to be). The second is a case with a flap that folds over to cover the iPad like a book. The flap and be reversed to prop the iPad into two different positions, one of which tilts the iPad, presumably for a better typing experience with the OSK. Apple also mentions support for Bluetooth Apple keyboards with the iPad, a feature which better make its way to the iPod Touch and iPhone, less Apple is looking to make folks very angry. It is unclear whether only Apple’s first party Bluetooth keyboards will work, or if any Bluetooth keyboard can be used with the iPad.

So far Apple has redesigned all of the native apps (Safari, Maps, Mail etc.) for the iPad. They have also developed the iWork software suit (which includes Pages, Keynote, and Numbers) as iPad applications (and will cost $10 a pop), which I feel confident will do a good job of showing off how much depth an iPad app can have when compared to more simple iPhone apps. Along with this additional depth will come higher price tags. This will be important in convincing potential customers that the iPad is more than just a giant iPod Touch or iPhone (or so Apple says). I’ve heard the word gold rushâ€ used several times today when talking about the market for new iPad software, but I have a feeling that it’ll take some time until the number of iPad specific apps is anywhere near the number of iPhone apps (currently at about 140,000). 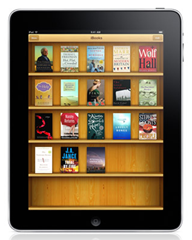 Apple has a new application which is included with the iPad out of the box called iBooks. There was a lot of hype about Apple coming to the rescue of print newspapers with some revolutionary form of digital distribution, but I don’t think anyone is saying that they’ve delivered that (it was a rumor anyway). IBooks is a simple e-book store which is controlled by Apple, and they’ve partnered with several companies to bring content to the storefront. It seems as though the hype about the potential for interactive magazines/newspapers will instead be fulfilled as iPad specific applications through the AppStore (that is, if companies want to make digital versions of their publications), rather than through Apple’s iBooks app. I’ve been wondering if Apple will release iBooks as an application for the iPod Touch and iPhone, and as much as I’d like to say that it would be a no-brainer for Apple to doâ€¦ I have to hold my tongue because this is Apple we’re talking about, and sometimes they do things that don’t seem to be practical to the rest of us.

Developers now have to decide whether to make an iPad application which will only function on the iPad, or make an iPhone app which will function across all generations of the iPhone/iPod Touch and the iPad. This is going to create some frustrating app store fragmentation, and generate tough choices for developers who are looking to create software for the largest possible audience. Apple will need to do some serious convincing if they want developers to start working on quality iPad applications maybe Apple hopes that if they say gold rushâ€ enough times, developers will blindly follow? Once the apps start flowing (and they invariably will), I think we’ll be spoiled with some awesome new interactive applications which will change the way we think about using software on devices of this size, but it will take time.