One of the notable items we’ve seen so far at CES 2011 is the Motorola Atrix, a smartphone that can be docked in a laptop shell or in a dock next to a monitor to deliver a desktop-like experience for browsing the web with a FireFox browser.

The Motorola Atrix is powered by a dual core NVIDIA Tegra 2 processor and has 1GB of DDR2 RAM built in which really kicks in to deliver when you dock the smartphone in the HD Dock to connect a display or when you connect the Atrix to the Motorola Webtop.

Other key specs include a 5MP rear facing camera, front facing camera, 4-inch display, 16GB of on board memory and a micro-SD slot. The Moto Atrix runs Android 2.2 and will work on the At&T 4G network.

The Webtop is an 11.6″ laptop which allows you to snap the Atrix in the rear and get a laptop-like experience on the go. Rather than using its own processor, the Webtop basically acts as a display, mouse and keyboard for the Atrix which is still providing all of the power.

When you are connected to the Webtop you can access your phone to send text messages and interact with apps as if you had the phone in your hands. When you disconnect you can take your open browser tabs with you.

The Atrix looks cool based on our initial time with the device at CES 2011 and definitely has potential. The biggest unknown right now is how much the dock and the webtop will cost. If the webtop is priced close to even a cheap netbook it will be hard for many consumers to justify the price. 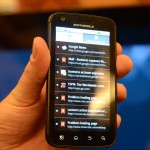 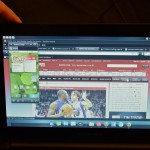 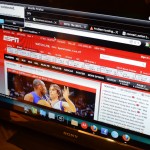 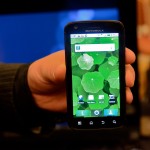 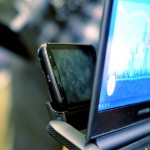 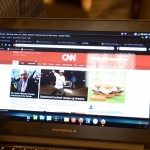