Back in 2004 our notebook partners faced a tough problem every notebook needed to be custom engineered for each GPU. That might not make a difference to consumers, who just buy complete notebooks with a GPU inside, but the problem with custom engineering is that it takes a lot more time and effort to bring a notebook to the market with the latest GPU.

For consumers, that meant that new notebooks which used GPUs typically took longer to come to market. 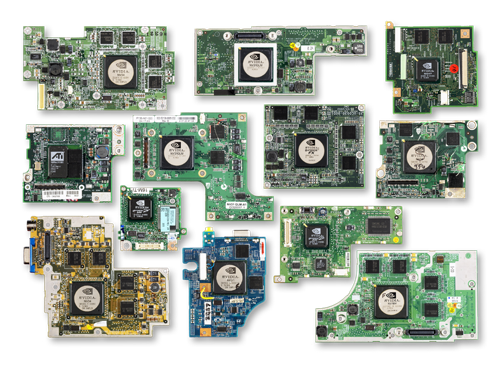 So NVIDIA took the lead in working with our notebook partners to define a standard module that could be designed once, and leveraged across many notebooks. We called this module specification MXM. Think of this as an add-in-card for notebooks. After doing all the technical homework, we released MXM as a standard to the computing industry. MXM was quickly adopted by OEMs and GPU makers alike, and it opened up the selection of a GPU to the most competitive GPU, which means consumers get better products. For our notebook partners, that was also good because then they could design one notebook to support a wide variety of different MXM GPUs. 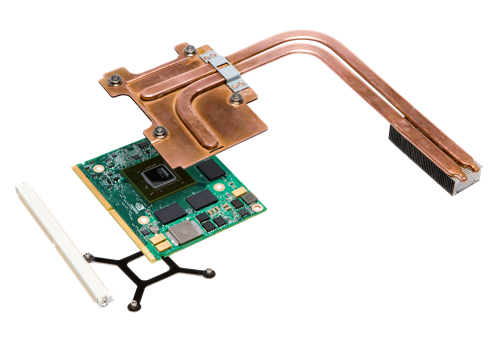 In today’s challenging economy, reducing unnecessary work and bringing out new products faster makes everyone happy both our partners and end consumers. In the case of MXM, using the interface can mean getting notebooks to market 3-6 months sooner than designing a new motherboard.

Today, you’ll find that nearly every high-performance notebook uses some form of an MXM card. In fact, not only is this the case for high-end gaming systems, but there are also many vendors who ship MXM in less expensive systems simply due to the design and manufacturing flexibility it gives them in their supply chain.

Notebooks are the obvious home for MXM, but as it turns out, the technology is not limited to this one market. Not only does MXM help make new GPUs available in notebooks faster, but it also makes it easier to get a GPU into anything that’s small and difficult to cool.

Today’s desktop designs are becoming increasingly focused on sleek industrial design. Many OEMs are now offering all-in-one systems (with integrated displays like the iMac), or tiny Atom-based desktops where there’s not a lot of space to cool a GPU, or even fit one in the chassis. These systems are facing many of the same problems that notebooks have faced for years. For these desktop designs, MXM offers a nice, compact existing solution that’s already an industry standard in notebooks.

You can find MXM modules in lots of all-in-one and small-form-factor desktop systems like the HP TouchSmart PCs, Apples iMacs, or Sony VAIO desktops, for example. You’ll also find many of the most cutting edge desktops that are packing high-performance GPUs into cool, quiet chassis. For example, the HP Firebird system has two MXM cards running in SLI an impressive amount of computing horsepower in a compact beautiful chassis.

Going a bit farther outside the normal consumer PC space, we’ve even found that there’s great interest for using MXM cards in embedded systems for industrial or military applications, as well as for high-end servers with GPU farms that need to pack more computational density into small racks

Going forward, we’ll continue to invest in making MXM a better solution. The MXM 3.0 specification adds new features like Display Port, shaves about 1mm from the thickness, and creates upward mechanical compatibility between small and large MXM form factors. With MXM 3.0, we are also happy to welcome AMD as an official partner of MXM. Their input has been instrumental in making MXM an open and forward-looking specification for everyone in the PC ecosystem.