Apple pushed a new update to their iPhoto app, which brings some bug fixes, a fix for crashes on systems with many users and little else.

iPhoto lets users organize images, do simple edits and then share the images online or via print.

The update will fix a problem with using the program on a machine that includes more than one user account. iPhoto would crash on such systems. It also includes improvement to “overall stability” meaning minor bug fixes that affected few people. 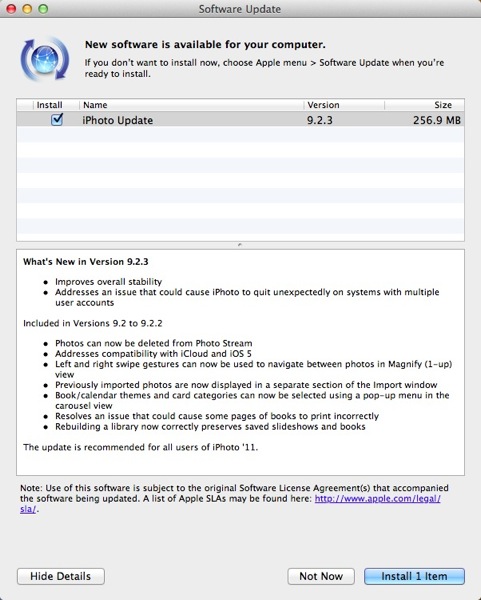 Apple recently pushed a major update of iPhoto to make it compatible with iOS 5.1 and iCloud. It also let users delete images from their iCloud Photostream.

The new iPhoto 9.2.3 will show up in Software Update on your Mac. Click on the Apple Menu and choose Software Update. Let it search for updates and then check the iPhoto update if it isn’t already. Click on Install at the bottom.

If you haven’t already, you might see an update for Safari and Thunderbolt on some Macs. These showed up in recent weeks.

If you want, you can download the update directly from Apple’s site. You might want to do this if you plan to apply the 200+MB update to more than one machine alleviating the need to download it many times.