It sounds elementary, but if you don’t properly wrap your MacBook’s power cord on the MagSafe Power Connector, then you can damage it. You will have to give Apple another $60-$80 of your money just to power and charge you expensive laptop if you ruin the one that came with the computer. 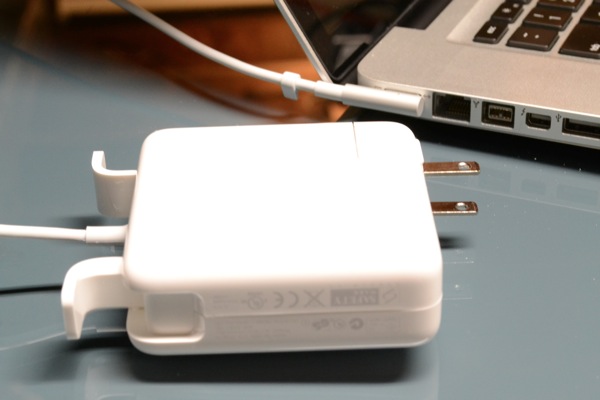 Notice the two hooks for wrapping the cable

All MacBooks have essentially the same kind of power brick, with just varying wattage. The brick comes in white with two flip out hooks that can be used to wrap the cable and make it ready for stowing in your computer bag. To get started, make a loop in the cable right were it is fastened to the brick. Then begin wrapping the cable around the two hooks. When completely wrapped around the hooks, secure it with the cable attachment that grabs the cable and keeps it in place while in your bag.

Below is a helpful video from the folks at Tested.com that demonstrates it in an entertaining way:

Over at Lifehacker they posted a tip on keeping your cable out of your way while connected to the MacBook Pro.

Unfortunately, this only works with the MacBook Pro because the white MacBook’s screen is too thick and the MacBook Air’s screen bezel is too thin. As seen above, just hook the little cord connector to the edge of the screen to keep it from getting tangled. You can also just loop the cable to give yourself some extra leeway keeping the cable from getting tripped on if it is hanging down on the floor.

Below is our video from our recent review of the 15″ MacBook Pro.