Toshiba has been on the front edge of the push to put glasses free 3D displays in notebooks, and a new rumor points to a possible release of a Toshiba 3D notebook that doesn’t require a clunky set of glasses. Tom’s Hardware reports that sources are claiming Toshiba will release a notebook capable of delivery glasses free 3D, using technology similar to the Nintendo 3DS, by the end of 2011. 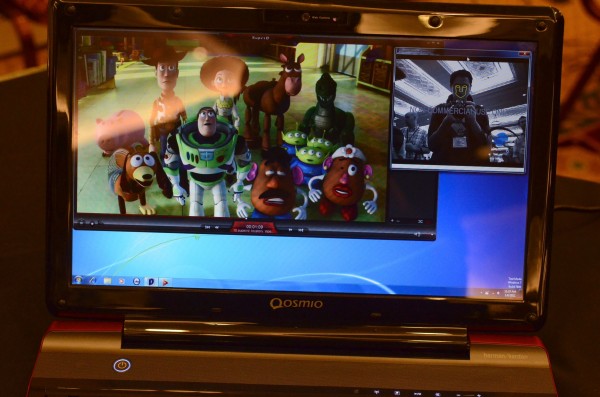 We’ve seen a collection of glasses free 3D TVs and glasses free 3D notebooks in person, including the best looking one which uses facial tracking to configure the 3D image relative to your position. Unfortunately, the upcoming Toshiba notebooks appear to be using a lenticular lens sheet to provide a 3D display.

The shift to glasses free 3D displays is a double-edged sword. On one hand, you no longer need to carry and wear a pair fo glasses that are certain to draw stares in public, and glasses free 3D is supposed to reduce eye strain that comes from watching too much 3D content.

On the other side, there can be some background shift in a glasses free 3D setup, which could lead to wobbling in the background which would at the least be distracting and at the most could actually play into eye strain or headaches.

That’s not to say that Toshiba isn’t working on these very issues, but it is a good reminder that we still have a way to go before 3D notebooks and glasses free 3D notebooks enter mainstream. Traditional 3D notebooks, with glasses have hit the market in mass, but Tom’s Hardware reports that, “sales are lackluster at best.”

The Toshiba glasses free 3D notebook is rumored to be on track for a release later this year, but there has been no pricing or images announced.

If you are thinking of waiting, keep in mind that 1st generation technology often comes with a high price and a few sacrifices in terms of use or quality. If you just want to watch 3D movies from time to time or game in 3D at home, you may be better off buying a 3D notebook that is on the market right now and sticking with the glasses.