The upcoming Acer Aspire 5738DG is the first commercial notebook to come equipped with a 3D display which Acer is calling â€˜TriDef’ (see what they did there?). The screen is most likely using a stereoscopic screen as it requires the user to wear the included polarized glasses in order to view 3D content using the notebook, but don’t worry, said glasses aren’t your standard cheapo cardboard and plastic red/blue glasses. Acer says that the in spectacles are sporty and stylishâ€, now all you need to do is decide whether or not you trust Acer’s sense of fashionâ€¦. Luckily, used without glasses, the notebook’s screen functions just like one would expected if it lacked a 3D display. 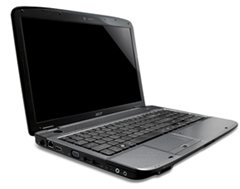 PCMag has gone hands-on with the yet released Aspire 5738DG and let’s us know how the display really functions. PCMag’s article can’t seem to stay away from the work gimmickâ€ which in itself should make you realize that 3D displays are not the wave of the future. Though at least they say that the screen manages to provide a somewhat worthwhile experience, with (supported) games seeming to benefit the most from the 3D feature. Aside from the 3D display, the 5738DG is decidedly ordinary. At least it won’t cost too much. The 5738DG is a budget desktop replacement laptop and should be available for around $700. The following is a brief list of specs, and you can find a more inclusive list on Acer’s 5738DG product page.