Apple’s MagSafe connector on the company’s line of notebook computers is a power cord with a magnetic head that attaches to the laptop and can detach easily so your laptop doesn’t become damaged or fall to the ground in the event someone trips over your cord. Now, the Cupertino, California company may be looking to bring the same technology to data cables as well, providing a MagSafe attachment to cables such as USB. 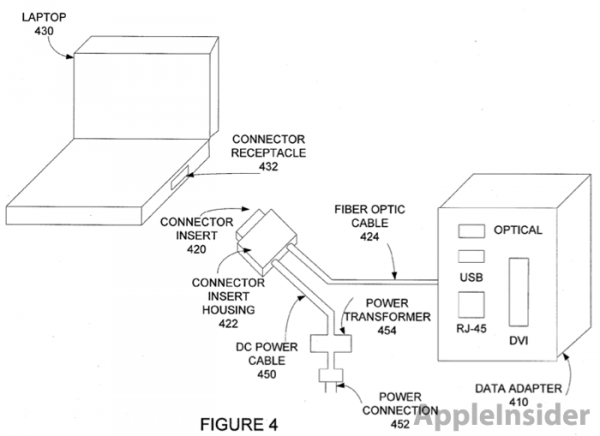 The recently discovered patent application filed by Apple shows a single MagSafe connection on a laptop, which would provide both power and data connection. A MagSafe cable would connect to the connection port, and would split into two ends–one for power and the second for data over a fiber optic line.

This way, connected peripherals, such as printers or Ethernet cables, can quickly detach as well to provide the same protection against damage resulting in someone tripping over a data cable. Though USB is used here as an example, other uses could include Firewire, Ethernet, and Mini DisplayPort to transfer data.

There is no indication, however, that the MagSafe technology to support data cables would make it to the market as Apple routinely files for patents for ideas that do not make it to market. If it does reach the market, it may help save USB ports and MacBooks from accidental damage as a result of someone tripping over an extended Ethernet cable that’s stretched across a room.

The use of an optical cable in the patent diagram also hints at a potential for use in Apple’s adoption of Intel’s forthcoming Light Peak technology. Light Peak promises to deliver faster connections and would replace a number of existing and legacy connection types, such as USB, Firewire, and DisplayPort, to provide a faster standard. According to Intel, “Existing electrical cable technology in mainstream computing devices is approaching practical limits for speed and length, due to electro-magnetic interference (EMI) and other issues. However, optical technology, used extensively in data centers and telecom communications, does not have these limitations since it transmits data using light instead of electricity. Light Peak brings this optical technology to mainstream computing and consumer electronic devices in a cost-effective manner.” Intel hopes to scale Light Peak performance over the next decade to achieve transfer speeds of up to 100 Gbps.