It’s almost common knowledge that Apple is getting ready to refresh the MacBook Pro line of computers within the next few weeks, and from the looks of an Intel ad we may know what the new MacBook Pro will look like. This wouldn’t be the first time Intel outed an Apple product, as they tipped us to the Core i processors arriving last year.

A diversion from the current models, the black notebook in the Intel ad below bears a striking resemblance to the MacBook Pro, well except it’s black, skinnier and has most likely lost an optical drive. 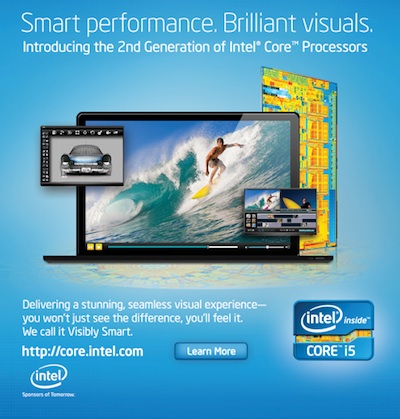 Fast Company points to a tell-tale IR port on the front right of the notebook in Intel’s ad as a key indicator that we are looking at a new MacBook Pro in this picture, as well as “Classic Apple design.” throughout the notebook.

If this design is legit it does lend credibility to the rumors of a new MacBook Pro without an optical drive, something made easier thanks to the fact that shoppers can get their software from the Mac App store. While the optical drive may go away it could be a little longer before the spinning hard drive is completely gone. Sure, a switch to SSD would be nice, but the price per GB for storage is still pretty steep in a Pro notebook that users may fill up fast with professionally taken photos and videos.

What about the color you ask? Well, Apple has been loving the aluminum finish for some time, but Fast Company speculates that the color could be part of a new lighter, scratch resistant aluminum alloy.

What do you think? Is this the new MacBook Pro?