MSI announced a pair of new 17″ notebooks, the MSI Fx700 and FR700 which feature an Intel Core i5 processor and a coating that is designed to keep smudges, fingerprints and scratches off of the glossy lid. 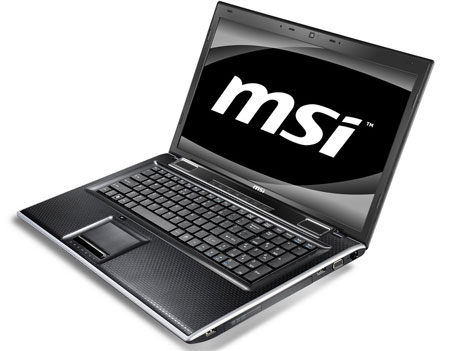 The MSI FX700 is a 17″ desktop replacement notebook that, in addition to the Core i5 processor, packs in up to 8GB DDR3 RAM, a NVIDIA GeForce GT 425M GPU w/ 1 GB RAM and Optimus and up a 320GB to 640GB hard drive. The notebook also comes with Windows 7 Home premium and a 6-cell battery, but no word on how long it will last.

The MSI FR700 shares all of the specs except for the NVIDIA graphics which it switches in integrated Intel graphics which should bring a lower price.

Both notebooks feature MSI Turbo Drive Engine technology which, according to MSI, “instantly throttles up system performance, so that your computer doesn’t bog down when it’s processing big load applications.”

No launch date or pricing was given.