The Lenovo Edge 13 comes with an 11.6″ 1366 x 768 display and an Ultra Low Voltage Intel Core i3 processor or an Ultra Low Voltage AMD processor, 2GB of RAM and a 250GB hard drive. With the six-cell battery, that sticks out the back, you can expect to get a little over 5 hours of battery life according to Engadget’s Lenovo Edge 11 review. The Edge 11 comes in glossy red, glossy black or matte black.

The Engadget review also praised the Edge 11 keyboard for a having, “just the right amount of give”, going so far as to say that the team has, “very deep feelings for this keyboard.” The Edge 11 even has that TrackPoint pointing stick for those users and a large touchpad for the rest of us.

That’s the good news. The bad news is that the Edge 11 isn’t available in the U.S. nor is it expected to be available here soon thanks to the ThinkPad X100e which currently fills this size in the stateside Lenovo lineup. It’s even more disappointing when you consider that reviewers have cited the Lenovo X100e as having low battery life and getting too hot. 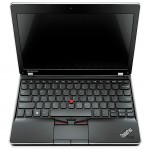 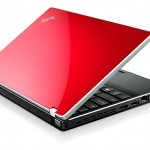 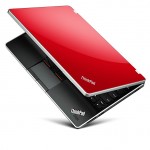