Who is this Notebook for?

The Samsung R480 is a consumer notebook that would be a good fit for use at home or in a college classroom. Thanks to the beautiful red Crystal Wave design, this notebook could also make the transition from home to the office without looking out of place. It is 5.1 pounds which is about average for a 14″ notebook which is heavy enough that you won’t want to take it everywhere, but it will fit in a backpack for a weekend trip or to and from class.

The 14 inch display on the Samsung R480 makes it easy to get work and enjoyable to watch a movie when traveling. The 1366×768 resolution provides enough space to get your work done and the screen tilts back far enough to be used in most situations. It is a glossy display, but like many that I have recently used, it is not too glossy. You still won’t want to use outside on a sunny day, but overhead lights or occasional outdoor use are fine.

The keyboard on the Samsung R480 is really nice. The island style and great key placement really make the keyboard standout. This keyboard is almost as good as those found on the Lenovo Edge 13 and Edge 14 which I have reviewed, which says a lot. The keys have great spacing, a good amount of feedback and provide an overall good typing experience. If you need to do a lot of typing, this is one of the best consumer notebook keyboards I have used.

The mousepad on the R480 is what Samsung calls an invisible touchpad. This means the touchpad blends in with the palmrest area; its borders denoted with 4 Blue LEDs in the corners.  The mousing surface has a good feel to it that lets you know where it begins and the palmrest ends which isn’t prone to the sticking that some afflicts some trackpads. The mouse button is one long button with a center pivot which is OK, but two separate buttons would be better; especially if you like to use your thumbs to click while typing.

The battery life of the Samsung R480 was disappointing in that it only achieved 2 hours under fairly normal use; Word, surfing the web, Tweetdeck and maybe a short YouTube video. I was able to get close to two and a half hours dimming the display a bit more but that’s still short by today’s standards. One thing I did like about the Samsung R480’s battery is that it has a built-in gauge to tell you how much battery life is left. This is very useful when you are grabbing a notebook and running out the door.

When it comes to enjoying yourself with the R480, the built in speakers and Blu-Ray drive will keep you entertained. The notebook handled both 720P and 1080P video files with ease though using the optical drive to watch a Blu-Ray disc does cut into the battery life.

The speakers on the Samsung R480 are better than expected and unlike many laptops don’t have a tinny sound. While you won’t be blown away by the bass and the middle is a bit muddy the speakers are still better than average and will get you through a movie or fill an office or hotel room with music.

The R480 is powered by a 2010 Intel Core i3 processor and backed up by 4GB of DDR3 RAM which provides it enough power to meet the needs of even an above average user. During my month with the device I used it for everything from editing photos, typing posts, editing videos to upload to YouTube and calling on Skype; all of which the R480 handled without a problem. If this sounds like the way you use a notebook you won’t need to worry about the performance on the R480.

Unfortunately, if you are doing something that is processor intensive the Samsung R480 will warm up a bit. It isn’t too hot to hold or use, but warm enough to notice and warmer than I have seen on other Intel Core i3 notebooks.

The Samsung R480 has plenty of ports to keep you connected.

The front also has a 3-in-1 card reader.

Ultimately, the Samsung R480 is an average notebook that defines itself with a great keyboard and a Blu-Ray drive at an affordable price. You can find a cheaper Core i3 notebook with a Blu-Ray drive, but you’ll be hard pressed to find one with a Lenovo-like keyboard, style and extra touches like a battery meter. If you’re looking for a notebook that has these extras for a small price premium then the Samsung R480 should be on your list. 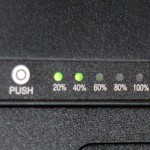 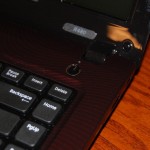 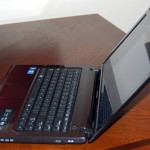 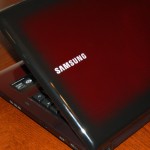 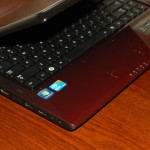 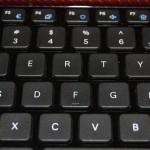 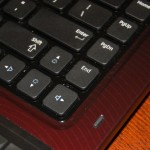 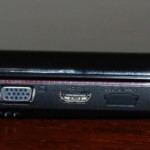 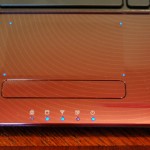 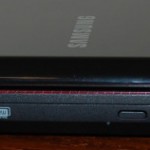