iPhone 4 Reception Fix in the Works

If you were not impressed with Steve Jobs’ original fix for the iPhone reception issues, then hold on. There may be real a solution coming. 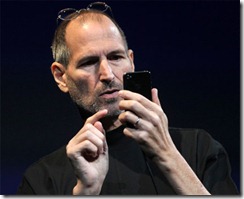 If the comments that were made in and later removed from the Apple tech support forums are true, software engineers at Apple are working on a update to the iOS4 software that might improve reception on the iPhone 4. AppleInsider reported that since the issue also affects iPhone 3GS handsets after they are upgraded to iOS4, software problem is to blame rather than poor antenna design. The report claims that 3GS users who upgraded to the new version of the OS are affected when they hold their phones with their hands over that device’s antenna. The report explains the problem and fix as follows:

The fix is expected to address an issue in iOS 4 related to radio frequency calibration of the baseband. Readers who saw the original forum discussions say that the issue is believed to occur when switching frequencies; because the lag is allegedly not calibrated correctly, it results in the device reporting “no service” rather than switching to the frequency with the best signal to noise ratio.

Reportedly, the reception issue only affects users when connected to AT&T’s network and not a microcell. A microcell is a device that hooks up to your home broadband network and gives you a strong cell signal in the home, kind of like a Wi-Fi radio gives Wi-Fi in the home. Instead of sending and receiving calls via AT&T’s network, the microcell routes calls through users’ home broadband cable or DSL connections.

If the AppleInsider reports are accurate, the fix will come sometime early this week.

Some actually think Apple may have known about this issue and that is why they came out with the Bumper case, which only covers the edges of the phone. It looks like they designed the case to fix this issue. In an email from our friend Sumocat at Gottabemobile, he said the following:

I am 90% certain the iPhone 4 was designed with the intent that it be encased.

1.       For the first time, Apple has released their own case, which seems to address the issues involving drops and reception.

2.       Flat front and back make it much easier to design cases for it compared to the rounded back on the 3G.

3.       I and others find the steel band and hard-edged buttons to be uncomfortable, prompting the need for a case.

4.       Since the Bumper does not interfere with the signal strength, there’s no compelling reason for the antenna to be exposed and the bare metal kind of has an inside on the outsideâ€ look to it.

I would have no problem if that was the intent, and actually think it’s a good idea.

He then added that people have a right to be upset since Apple was not very forthcoming about this. Is he right?

I can see the plausibility of Sumocat’s comments. If they had even said, “This addition of the external antenna requires the use of a case, so we made one with as small a footprint as possible. It’s only $30 but you can get one from someone else if you prefer a different style.”

If Apple had followed that strategy, then “the haters” (people who dislike Apple no matter what they do) would have complained about the need for a case. If there is one thing I’ve learned you will never please the hater so please your customers instead.