Carrying a MacBook charger or notebook charger around all the time is a major hassle and even though battery life is getting better, there is still a need for many users to carry a notebook power adapter along when they go on a trip or even just to work.

The FINsix laptop charger is about a third of the size of a MacBook Pro Retina Charger, and is more likely to be mistaken for a taller iPad charger than it is for a notebook or laptop charger.

Even with the smaller size, the FINsix laptop charger is capable of charging a MacBook Pro and thanks to many other tips most notebooks on the market.

FINsix is aiming for a $89.99 price for this incredibly small notebook charger and will allow users to choose the tip they need or ship a collection of common tips with the device when it arrives on store shelves this summer.

The issue in the way of making this a super small and useful MacBook Pro charger is the fact that Apple doesn’t allow other companies to make chargers for Apple notebooks. A company rep told Notebooks.com that they are in talks with Apple, but it is more likely that Apple would either purchase the technology outright or FINsix will need to offer a do-it-yourself solution to splice the MagSafe adapter or MagSafe 2 adapter off your existing cables to charge a MacBook Air or MacBook Pro.

From a tech standpoint this small notebook power adapter delivers 65 Watts of power, is 4x smaller and 6x lighter than the traditional MacBook charger and only uses one outlet unlike the bulkier standard charger from Apple. The notebook adapter for other manufacturers also includes a USB port to charge a smartphone or tablet. 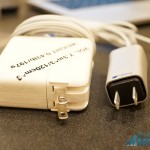 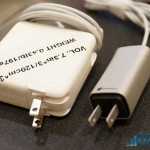