The MacBook Air is the fastest growing Apple product, according to J.P. Morgan analyst Mark Moskowitz. Sales of the MacBook Air tripled from the same quarter the previous year. Possible reasons cited were the price cut and hardware improvements. But Moskowitz says newly refreshed form factor has ushered in a brand new category of device. 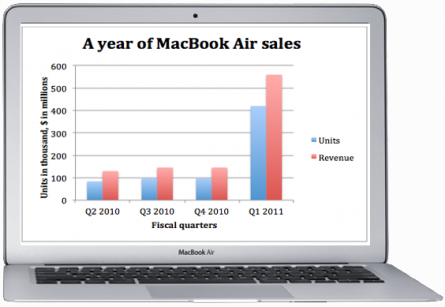 Moskowitz called it a quasi-tablet, saying:

“We believe the key attributes that distinguish the MacBook Air from standard notebooks and even tablets could help define a new category — ultra-portable devices for productivity users — within the PC market.”

Apple did a good job of refreshing the MacBook Air. We called it one of the best notebooks we’ve ever seen when we reviewed it at the time of its refresh last fall. Our headline stated that the Macbook Air was an “excellent mix of form and function.” It is a beautiful and incredibly enjoyable computer. But we still would not call this a new category of device. It is Apple’s ultra-portable. Some have said it was Apple’s netbook and that is easy to see why from the size and weight.

The reason one would not categorize the MacBook Air as a netbook is the price and performance. Typically netbooks are less than $400 and only marginally capable computers. Only the simplest of tasks are usually possible on a netbook. The MacBook Air is too expensive and too powerful to fit that category.

Trying to call it a tablet, even a quasi-tablet, is just silly. Tablets are a specific kind of device as well. They have a touch and/or inking interface, instant on speed, and, in their modern iteration run apps, not full-blown software. The MacBook Air meets only one of those requirements – it has an instant-on capability.

The MacBook Air is an ultra-portable notebook PC. It fulfills that role for users who want an extremely portable notebook, but don’t need all the storage of a regular laptop or desktop machine. They also are not expecting it to run power-hungry software, but do want it to run some of the same software they use on a desktop or larger laptop system. The MacBook Air is a secondary computer, like most netbooks, but it is not really a netbook either.

The reason we believe the MacBook Air jumped in sales is the cost made it affordable while the form made it exciting. Finally, the power made it more usable than the average netbook.

What the MacBook Air did do is give us a glimpse of the future of ultra-portables, a long establish category of machine. We are already seeing copycat devices like the Samsung Series 9. With the above sales numbers expect even more of them.