The two most important features of the new MacBook Pro include the faster and more efficient Intel Haswell processor and a price cut of $200 on the base model of the 13-inch and 15-inch MacBook Pro with Retina Display.

Apple joined the efficiency of the Haswell processor and OSX 10.9 Mavericks, which also lengthens battery life by as much as an hour to 90 minutes alone. Haswell runs on a 22 nanometer processor and includes more powerful video rendering built into the chip. Mavericks improves battery life with more efficient power consumption features. 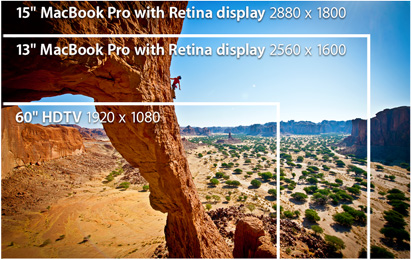 Thanks to the Haswell processor and more efficient OSX Mavericks, the battery life on these machines jumps to 9 hours for the 13-inch model. The larger screen on the 15-inch model will deplete that battery life making it last only 8 hours.

Apple promises these numbers, but in our experience Apple usually offers accurate battery life figures. This changes when a user runs the display at full brightness and never lets the display sleep when not using the computer. So, used in an energy conscious way, expect to get a good seven-plus hours of battery life.

Some other improvements include Thunderbolt 2, the new connectivity standard that makes it possible to expand the hardware of a MacBook without unscrewing the base plate. Plug a 4K display into it for incredible resolution while working in Final Cut Pro or with Photoshop. Add a huge fast Thunderbolt storage device that runs as fast as the built-in SSD.

The new MacBook Pros won’t allow users to add RAM. To get the incredibly thin specs, they hardwired the RAM to the motherboard as they did with the MacBook Air. As a result, we get a machine that’s only .71-inches thin and 3.46 pounds in the 13-inch line.

Here’s the full list of specs for the 13-inch MacBook Pro with Retina Display that costs $1,299.

Here’s the full list of specs for the 15-inch MacBook Pro with Retina Display that costs $1,999.