How to Restore Windows Start Button with Pokki

A free utility for Windows 8 called Pokki restores something that people who bought a new Windows 8 computer might miss: the Windows Start Button. Many experienced Windows users find the new OS frustrating because it lacks the button present in every version of Windows for the last two decades.

When Microsoft first introduced the Start Button in Windows 95, haters made fun of the operating system’s choice of the word “Start.” Because who asks users to hit a button labelled “Start” to end their current computing session? Now experienced Windows users are fully acclimated to the user interface and find it hard to adjust to Microsoft’s abrupt change. Rumors tell us Microsoft might make an about-face with regard to the Start button, but until they do, there’s Pokki.

Pokki installs on Windows 8 machines and puts a Windows button in the lower left corner of the screen. Pokki also restores the task bar which shows icons of often used programs for quick launch. The Task Bar didn’t go away in Windows 8, but Microsoft hid it in the Windows 8 Desktop interface that one must enter to run classic Windows 7 applications incompatible with the new Windows 8 user interface formerly called Metro UI. Pokki makes their version of the Desktop the default interface instead hiding it.

Click on the Window button and the familiar stack of recently launched application icons, along with links to often used features, gets displayed. We find our Internet Favorites, a fly out menu of All Apps installed on the system and a similar menu for Control Panel tools. Below those three fly out menus we get links to user media, like the user’s home folder, documents, music, pictures and Windows Explorer view of the user’s computer. Next there’s the recent applications and the Shut Down button, and a fly out containing buttons to Log Off. 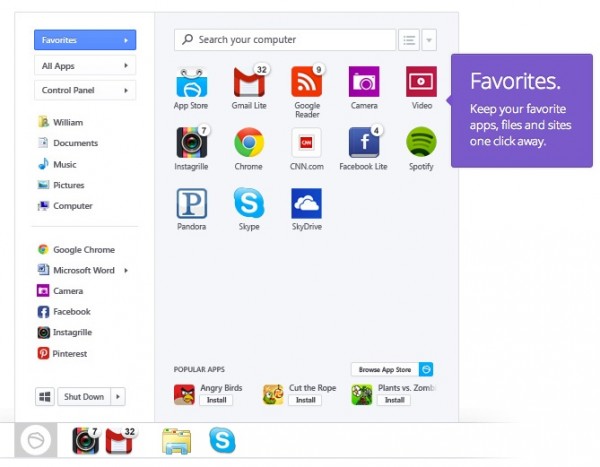 In the larger box right of the list explained above the user sees a grid of their favorite software. Pokki also shows links at the bottom of this section to popular apps that users can install coming from the Pokki app store. The company probably makes money offering free apps that software makers pay Pokki to include that users can install and maybe see ads or buy in-app upgrades.

Learn more about the Pokki app store and strategy in the following TeamPokki video.

We find this a fair trade-off and think Pokki greatly improves the Windows 8 experience. Users can fix our biggest beef with the OS while still getting at what’s good about Windows 8.

To search for apps and files installed on the system, enter text in the search box above the grid of favorite apps. The list icon next to the search box shows the computer’s Windows 8 notifications.

Pokki solves one of the biggest complaints about Windows 8 coming from Windows 7 lovers. Try out this excellent little free utility. We think it will make Windows 8 more usable especially for computers without a touch screen. If a new Windows 8 computer doesn’t include a touch screen, don’t run Windows 8 without Pokki.