If the design of the Novero Solana netbook/tablet looks familiar, it is. The last time I saw something like this was the Dell Inspiron Duo. Back then the design struck me as a good idea, but in practice the Duo didn’t live up to its promise.

That doesn’t mean the same fate awaits the Solana, but the $699 asking price is a concern. It might be hard to convince consumers to pay that much for a netbook, even if it does have some impressive specs.

The system runs on a dual-core Intel Atom processor and 2GB of RAM (twice as much as one usually gets) plus an SSD instead of a hard drive, raising the potential for a snappy machine. The Solana comes with Windows 7 Home Premium (not Starter) and Android 2.3 Gingerbread that users will be able to switch between “with a push of a button.” 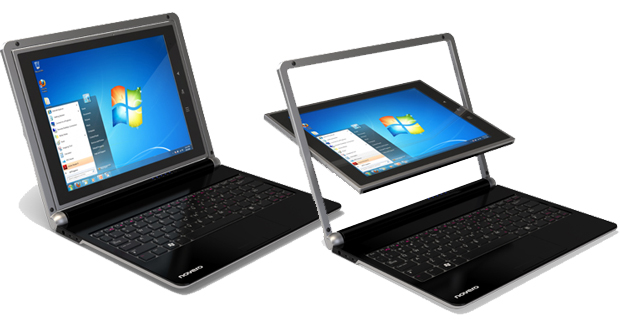 Users will be able to upgrade to Windows 8 easily since the Solana has the specs for it. I’m disappointed that the 9.7-inch touchscreen only has a 1024 x 768 resolution, but that’s the minimum required for full screen Metro apps.

In addition to WiFi and Bluetooth the Solana also has a configuration with an HSPA+ 3G modem for mobile broadband.

As laptop/tablet hybrids go, I am a fan of this solution for dealing with the screen. The Lenovo Yoga is still a favorite, but swinging the screen around in this manner just seems like more fun. Plus, it covers the keyboard so I don’t have to worry about it.

As Dana Wollman of Engadget points out, the 4:3 aspect ratio on the display makes the overall system a little on the awkward side, size-wise. Plus, the hinge mechanism isn’t as smooth as it could be.

On the software side, I’m also none too excited to see Gingerbread instead of Honeycomb or Ice Cream Sandwich in the Android half of things. I’m willing to deal with it for smaller devices like phones or 4-inch PMPs, but on a tablet-size device I want my tablet operating system. 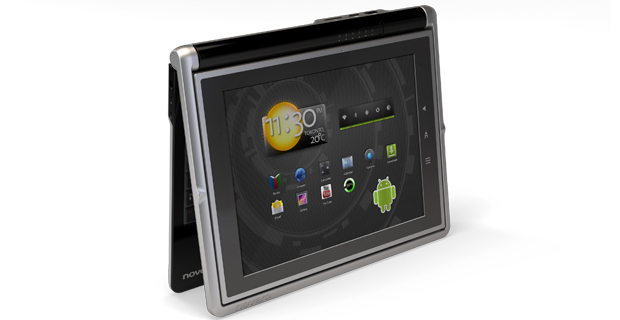 The other issue is apps. Right now the Solana doesn’t have access to the official Android Market, thought he company is working on that. Still, not all Android apps can run in an x86 (Intel/AMD) environment, being specifically for ARM chips. This may change in the next few months, especially if manufacturers launch a bunch of dual Windows 8/Android machines. Until then finding apps that work may be a crapshoot (sound familiar?).

The good news is that the hardware doesn’t seem like it will be a problem. Wollman reported snappy performance on the pre-production model she saw at Mobile World Congress, both for Windows and Android.

Novero expects to launch at the beginning of the second quarter (April or so) in the US and Europe. The standard configuration with a 64GB SSD will cost 500€/$699 according to their press release.