The Lenovo ThinkPad Twist is the first business Ultrabook Convertible to arrive with Windows 8. The Twist twists from a small portable ThinkPad notebook with the well-known ThinkPad keyboard to a small Windows 8 tablet thanks to a rotating hinge.

Switching from a notebook to a tablet isn’t new, but combined with Windows 8’s touch-friendly design,  it’s a vastly improved user experience than the earlier days of Tablet PCs, even though there is no stylus.

The ThinkPad Twist is an attractive option for businesses looking to bring Windows 8 and Windows 8 tablets into the workplace with an $829 starting price and more functionality than the Surface RT which lacks a desktop mode and the ability to run legacy applications. 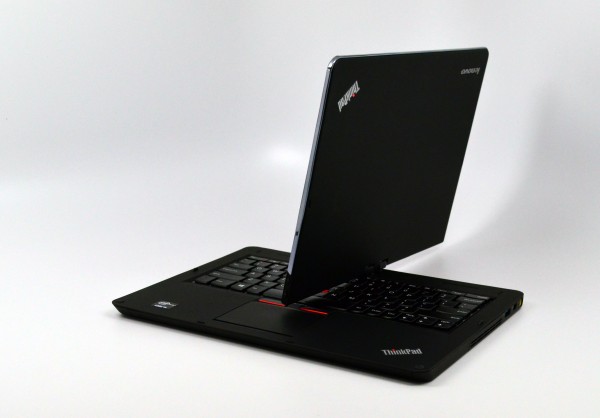 The ThinkPad Twist switches from notebook to tablet.

Lenovo also offers the IdeaPad Yoga 13, a consumer focused Ultrabook Convertible that uses a sexier hinge system to switch from tablet to notebook. The Yoga 13 is more expensive and doesn’t offer as nice of a keyboard, as good of a tablet experience and business support.

The ThinkPad Twist in Tablet mode.

The ThinkPad Twist gets its name from the twisting hinge that allows the tablet to switch from notebook to tablet. The hinge is sturdy enough to keep the screen locked in place even while using touch in notebook mode. The swivel is smooth when sliding into tablet mode. The screen can also sit in a type of presentation mode with the keyboard tucked behind. This is good for giving a presentation and it’s easier to watch a movie or play a game while in a cramped airplane seat.

Lenovo is well-known for good build quality and the ThinkPad Twist doesn’t disappoint. The notebook is rigid, even in the center where many notebooks lack support. Lenovo used Magnesium alloy and Gorilla Glass to enhance the durability. The Twist is a thin machine with better looks than you would expect in the business market, though it isn’t as thin and beautiful as the ThinkPad Carbon X1. The Twist measures 20mm thick and weighs 3.48 pounds.

A look at ThinkPad Twist ports and connections.

Lenovo placed a small power button on the right side of the screen next to the orientation lock. Users will press the wrong button more than once. There is a Windows button centered under the display for use in tablet mode and volume controls on the bezel.

The ThinkPad Twist includes a Mini HDMI and Mini DisplayPort connection for sharing the screen on a larger display, an SD card reader, Ethernet port as well as two USB 3.0 ports and a combo microphone headphone jack.

Swivel the screen and the ThinkPad Twist is a tablet.

By using a 12.5-inch display the Twist is more portable and easier to use as a tablet than the IdeaPad Yoga 13 and other 13-inch business notebooks. The display is 1366 768, a lower resolution than the Dell XPS 12, but still capable for a 12.5-inch display. The multi-touch screen is responsive and looks good. The display is rated at 350 nit brightness, and it is bright, but it is not a matte display or one we would recommend for use outdoors regularly. Viewing angles are good, so it’s possible to share the screen with two to three people for a video conference. 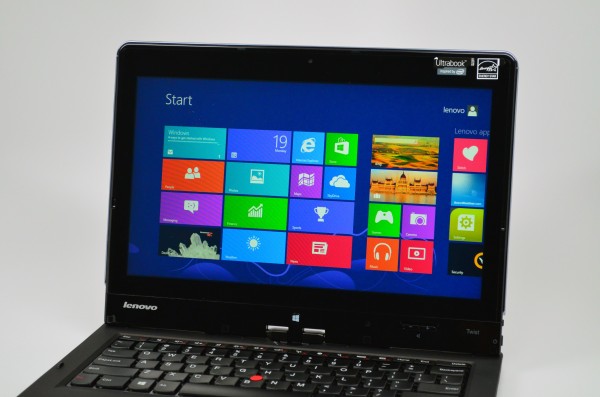 There is no pen support for the screen, so don’t plan on inking on this notebook/tablet combo. The screen rotates based on how you hold the Twist. This works well for the most part, but on several occasions we had to waste time rotating the notebook over-and-over to get the display to orient itself right for notebook mode.

The dual array microphones and VOIP software enhance video conferencing by dialing down background noise. The webcam is below par for a business notebook with grainy images in anything but bright light.

Business users will love the ThinkPad Twist Keyboard which delivers an amazing typing experience thanks to perfect key travel and springy action that resets fingers so they are ready to hit the next key. The keys are large and slightly concave to guide fingers into the center of the key. Even though this is a small notebook users won’t miss out on a traditional ThinkPad typing experience. The keys are not backlit. 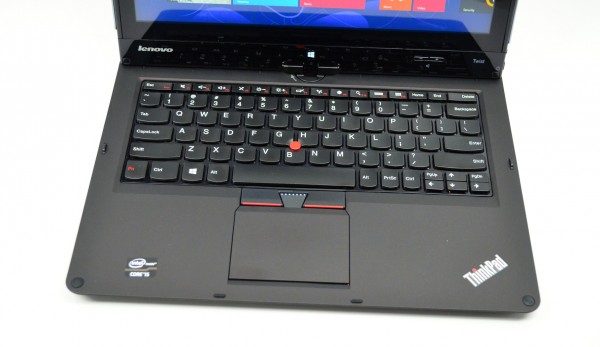 The Twist also includes a decent size touchpad and the ThinkPad NavPointer and mouse buttons. The touchpad is smooth and responsive, though we found ourselves reaching up to the touch screen more often than going for the touchpad since the screen is located so close to the keys on this small notebook.

The most popular configuration will feature a 3rd gen Intel Core i5 processor, 4GB RAM and a 500GB hard drive with a 24GB solid state portion to speed up performance. The ThinkPad Twist didn’t run into any issues while we used it to work in Office documents, browse the web and use apps in the touch-friendly user interface of Windows 8. The notebook is designed for mobile productivity, so don’t plan on gaming or doing heavy photo or video editing. 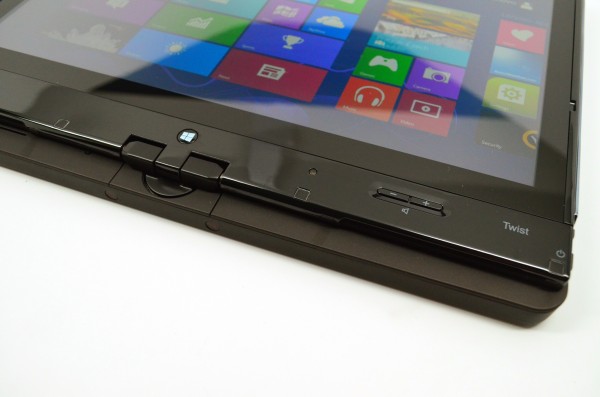 The ThinkPad Twist speakers sound good for a small room, thanks in large part to the Dolby Home Theater v4 software which boosts the music and offers multiple modes and an equalizer to further enhance listening. Users will want to invest in a good pair of headphones or speakers at their desk as the built-in speakers aren’t great for long listening sessions or for a noisy room.

Battery life on the ThinkPad Twist isn’t going to get most users through the day, clocking in at four to five hours. There is no user-replaceable battery on this notebook, so plan to look for an outlet during lunch.

The ThinkPad Twist is a well designed Ultrabook Convertible for the business world with a great typing experience and offers more value to business users than the Surface RT, especially for businesses that need to run legacy apps on a device that pulls double duty as a tablet and a notebook. While the ThinkPad Twist is more unwieldy than an iPad, it does offer more in out of the box productivity for businesses. 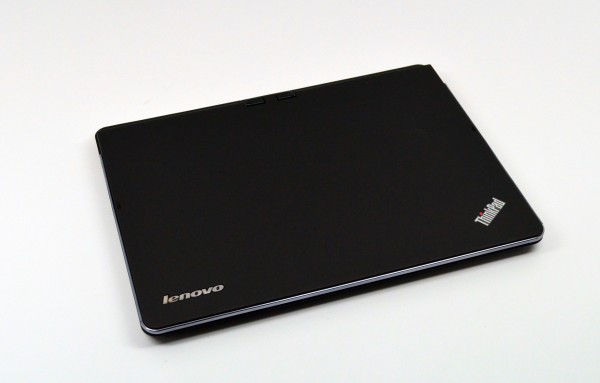 The ThinkPad Twist is a good business Ultrabook Convertible.

The ThinkPad Twist starts at $829 direct form Lenovo and includes the option to buy a number of docks and accessories as well as the extended warranties and support options businesses look for. 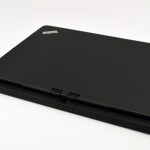 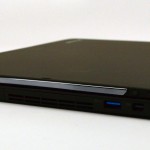 A look at ThinkPad Twist ports and connections. 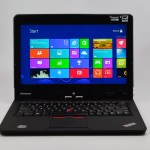 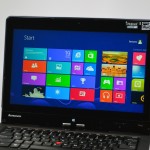 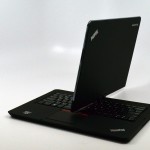 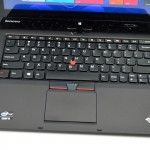 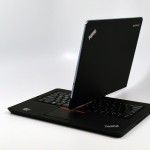 The ThinkPad Twist switches from notebook to tablet. 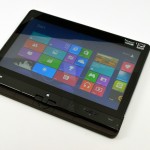 The ThinkPad Twist in Tablet mode. 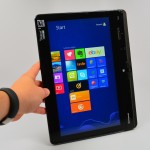 Swivel the screen and the ThinkPad Twist is a tablet. 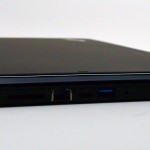 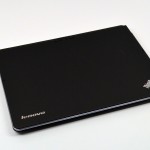 The ThinkPad Twist is a good business Ultrabook Convertible.