Lenovo’s introduced the ThinkPad X200s, a lightweight business notebook for business travelers and the X200t,the first widescreen ThinkPad tablet. Tom Ribble, the director of worldwide ThinkPad marketing, called me this morning to talk about the latest additions to the ThinkPad family.

According to Tom, the X200s is about as thin as the ThinkPad X300. Optimized for professionals on the move, the X200s can run for up to 13.2 hours with an extended 8-cell battery.

The ThinkPad X200t will replace the X61t. The new X200t has a maximum runtime of 10.5 hours with the optional 8-cell battery. It features many improvements over the X61t including improved inking sensitivity, an optional webcam and stereo speakers. Lenovo’s also improved touch sensitivity and palm rejection. The display now swivels in either direction.

update:Our friends over at GottabBeMobile got their hands on a ThinkPad X200t prototype:

Both the ThinkPad X200t and X200s can be configured with up to 4GB of RAM and the latest Intel Core 2 Duo low-voltage and ultra low-voltage processors.

The X200t and X200s will have a full range of 2.5-inch storage solutions, including 64GB or 128GB solid state drives, up to 320GB 5400 rpm drives or up to 160GB high-speed 7200 rpm drives. This breadth of drive options is lacking from several of Lenovo’s competitors’ thin and light systems, which often use 1.8-inch drives that spin as low as 4200rpm.

Lenovo also introduced a new Ultrabase that will be compatible across the ThinkPad X200 product line. The Ultrabase can be outfited with an optical drive (DVD or Blu-ray Disc) or a second hard drive. It can also charge a second battery. 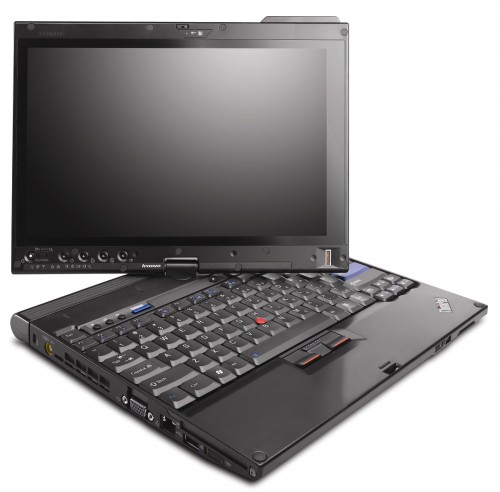 Business notebook manufacturers have been bragging a lot about long runtimes lately, but as with other manufacturers you’ll have to shell out a steep premium to get the maximum runtimes of 13.2 and 10.5 hours that Lenovo claims. According to Lenovo, Pricing for optimized models of the ThinkPad X200s notebook starts at $2,242 and the ThinkPad X200 Tablet starts at $2,323. Much of that cost is due to still expensive SSD prices. The best bang for your buck in terms of battery life improvement is to opt for LED displays, which improve battery performance by about 20% compared to notebooks with LCD displays.

The X200s and X200t will be available from Lenovo.com and business resellers starting next week. 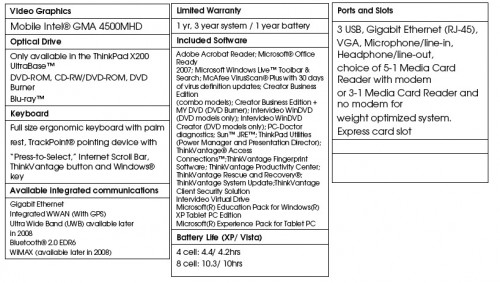