Last week NASA Inspector General Paul Martin told a House subcommittee that between April 2009 and April 2011 the agency lost 48 laptops and mobile devices to theft. One of the laptops stolen in March 2011 contained the codes to control the International Space Station. Oops.

The station isn’t in any danger, apparently, but this confession highlights how much of a problem theft is when dealing with mobile technology. Even if you don’t engage in high-risk activities, like leaving your laptop on a cafe table while you go to the bathroom, you might still end up without your tech if a sticky-fingered TSA agent decides to stuff it down his pants.

Unfortunately, anyone is at risk from NASA employees on down to the average person. Still, I’d like to think that government employees would be a little more careful about their stuff and that the agency itself would have some robust security in place to deal with the situation. If the government needs help in this area, we’re here to offer it. 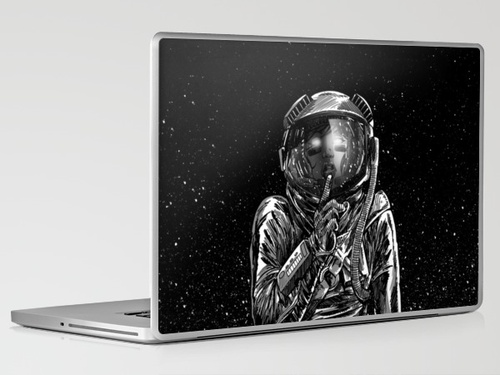 Image: The Secrets of Space Laptop and iPad Skin - society6

I suggest getting LoJack for Laptops on board or make sure everyone has iCloud enabled if you have a fleet of Macs. Also, buy everyone a MicroSaver retractable notebook lock from Kensington. It’s light enough to carry on trips and easily wraps around table legs and other secured fixtures to keep a laptop from walking off when one’s back is turned.

(Related: How to Protect Your Notebook in Case You Lose It)

For mobile devices, invest in a Zomm Wireless Leash and some mobile security, at least.

Even if your laptop doesn’t contain the government’s secrets or controls for the ISS, you should still do what you can to protect it from thieves who may be after more than just your sweet hardware and quick cash.