The MCE Optibay opens up the options for MacBook upgrades by replacing the Apple SuperDrive with a hard drive or SSD, depending on your needs and bank account. I was pleased with the results! Combined with the OCZ Agility 3 SSD I reviewed as part of this upgrade process, I have a fast flash drive to run OS X 10.7 Lion on and the capacity of a 500GB drive for file storage. 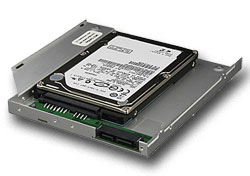 The process of installing the Optibay will challenge beginner notebook hardware hackers. I was able to perform the upgrade thanks to a decent guide included on the DVD in the kit. I tested the process out before I turned on a video camera and decided this was too complicated to repeat. So, video below is only a description of what I already did along with a demo of how to assemble the external SuperDrive case.

Take off the bottom of the computer and touch some metal to discharge electrostatic build-up. In my case, I also upgraded my hard drive with an SSD, so I had to remove the hard drive before putting it into the Optibay. To do that, follow the video below.

To perform this upgrade you will need a very tiny Philip’s head screwdriver and a special Torx T-6 screwdriver, something you can get at any hardware store. MCE provides them in the kit. Finally, it is a good idea to perform this on a smooth or soft surface. The lid of your MacBook Pro is easily scratched. 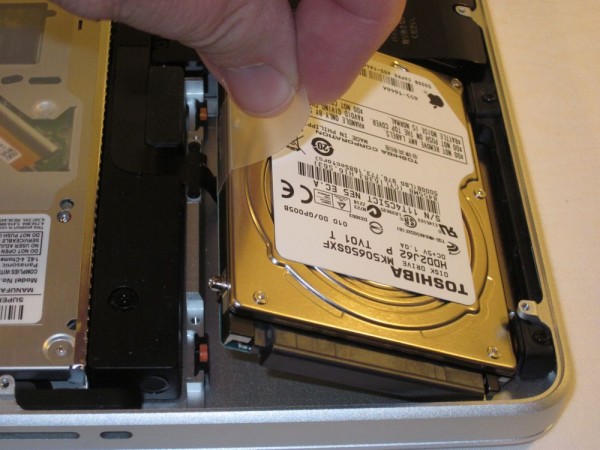 Follow the steps in the above video or an article I posted about replacing the stock drive. This is a fairly simple part of this complex upgrade process.

Boot the system with the bottom cover placed over the bottom of the MacBook Pro. You don’t need to screw it into place (unless you are really paranoid about such things). If the computer boots and seems to recognize the drive, then shut it down again, since you are just testing it. You are ready to remove the SuperDrive and install the Optibay with your old hard drive installed in it.

The Optibay comes with a decent PDF file that walks you through the process for the various kinds of MacBooks. Here are the basic steps:

Restoring the Operating System and Your Files

Boot the system again and if it works, reinstall OSX and restore your files. In the article about replacing the MacBook hard drive with the Seagate drive I describe this process, so follow those steps. If you are upgrading to Lion, consider making a USB install disk and then install Lion on the clean hard drive and copy your files and apps using the Lion Migration utility.

Assembling the SuperDrive and MCE Enclosure

Assemble the MCE external SuperDrive housing that comes in the kit following my instructions in the first video above. It is as easy as attaching a tiny logic board to the drive’s SATA connector and carefully placing the drive in the bottom of the black housing. Place the top half on and slide it till it clicks into place. You can now connect the included USB cables to the SuperDrive and your MacBook Pro and it should work. This process is not described in the PDF MCE sends, so be sure to watch the video. 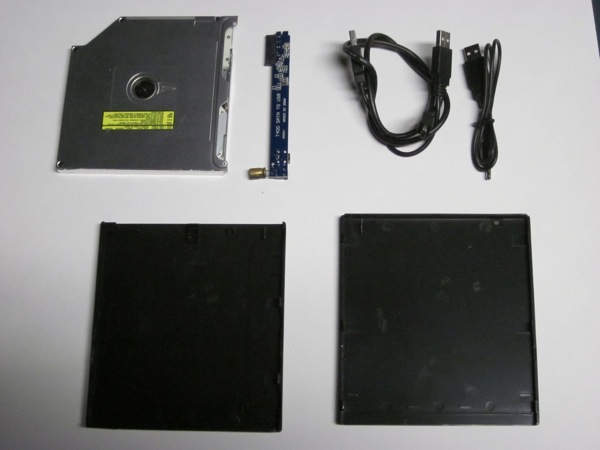 The MCE Optibay housing is made of a very lightweight aluminum. You will have to be careful. I think the material is both a good and bad thing. The Optibay won’t add much weight to your computer, but it is flimsy enough that it is easily bent while installing. Once you get it into place this won’t be an issue, so just be careful with everything in this process. 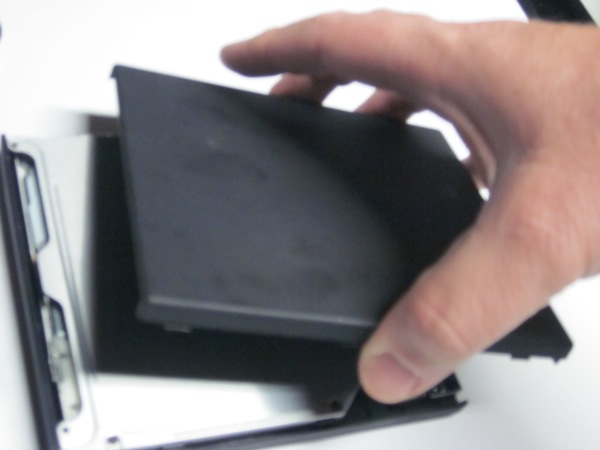 The external SuperDrive housing is made of low quality materials too. It works, but the case is a flat black rubbery material that easily collects fingerprints that are hard to clean off. It looks and feels flimsy. The drive seems very slow compared to using the SuperDrive internally. USB 2.0 is just not as fast as an internal SATA connection. MCE has higher quality external DVD drives but you have to pay extra for those. It might be worth the money to get one from MCE or a third party.

To watch DVD movies using the SuperDrive in the enclosure you have to install an app from the included disk. Without it, the DVD player in your MacBook will not recognize the drive and won’t play your movies.

The upgrade is definitely wroth your time if you want to run Mac OS X on a smaller SSD and store your personal files on the second drive in the Optibay Drive Kit. I ran Xbench on the SSD, a 7200rpm Western Digital Scorpio Black 500GB notebook hard drive in the Optibay Drive Kit, and on the original 5400rpm hard drive that came with the MacBook Pro. The results proved that this upgrade is worth the hassle because of the drastic speed bump you gain over the stock hard drive or the 7200 rpm WD hard drive.

The overall disk test scores were as follows, with the fastest in bold:

The average sequential read/write scores were as follows:

The average random read/write speeds were as follows:

The SSD killed the other two drives in the random read/write test, which is where SSDs really shine. The write test was a more modest improvement.

I am extremely pleased with this upgrade, even despite the quality of the SuperDrive enclosure and the flimsy aluminum used to make the Optibay. Having both an SSD and a second drive for my files and music adds a lot usefulness and enjoyment. I loved my 15″ 2011 MacBook Pro before, but thanks to OCZ and MCE it is a screaming fast system with plenty of room for all my photos, videos, music and documents. I’d like higher quality materials, especially with the SuperDrive enclosure. That said, I can recommend this upgrade kit with a few considerations:

There are several buying options. The basic setup that I was given to test by MCE is $99, and that is what I recommend for the do-it-yourself upgrader. It includes the Optibay housing for the second internal hard drive and the cheap enclosure for the SuperDrive. Other optional add-ons include:

The basic $99 kit which is what we recommend includes the following: