hulu Plus: iPad App of the Week

hulu Plus is a limited beta app for the iPad that plays hulu streaming video content on the iPad for a subscription of $9.99 per month. 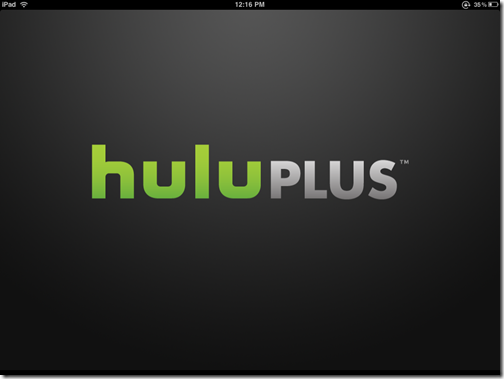 At this time you can download the hulu Plus app from the app store and check out a limited selection. An invite to the beta program, which will allow full access to all of the videos available on the iPad, can be requested from within the app or here. The available content is limited in comparison to what is available on the hulu website itself. 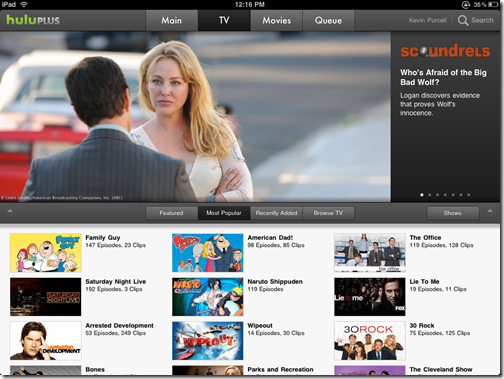 When the app is first  opened, the top half displays screen shots of a few selected shows or movies. Above that are four tabs, a button to access the user account, and a search button. The four tabs are Main, Movies, and Queue. The Main screen shows the screen shots and a grid of video thumbnails with title and episode/clip count. There are four tabs between the screen shot and the grid of thumbnails. The Featured videos tab is for shows hulu is featuring at the present. The Most Popular, Recently Added and Browse TV tabs are pretty self-explanatory. 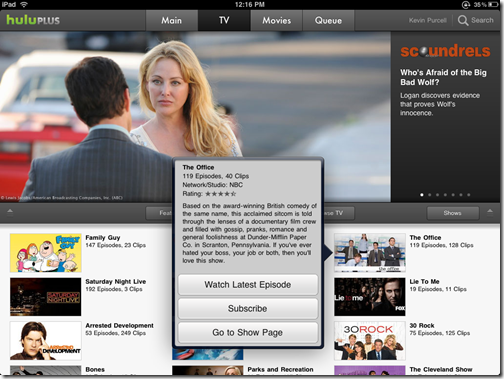 The screen shots can be hidden by tapping the up arrow to the far left or right. Each individual video thumbnail can be tapped and held to show a pop up box with the basic information about the video, including a synopsis of that episode and star ratings. There are three buttons which let the user either Watch the Latest Episode, Subscribe to that program so that when new episodes are released they will show in your Queue, or finally a link to Go to Show Page. 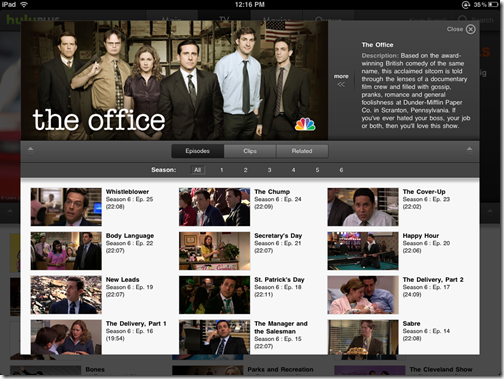 The Show Page shows the movie posterâ€ of that show at the top with a description. It can be hidden by tapping one of the up arrows on to the right or left of the middle toolbar. The tree tabs available are Episodes, which lists in a grid the full episodes, Clips, which lists short clips of the show, and Related, which gives a list of similar kinds of shows available on hulu Plus.

Under the taps are buttons for each season of the show. Tap the number of the season you want to see or tap All to get all the shows episodes. Of course you can always tap an episodes thumbnail to start watching that episode, clip or movie. 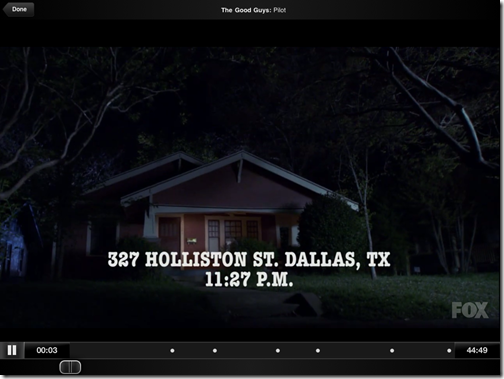 When you finally do watch a video, you will see the Done button in the upper left used to return to the main hulu interface. The shows title and episode title appear at the top. The bottom is the shows time code with a play/pause button on the left. Also the show can be paused and then played again by tapping the video screen itself. The progress bar shows how much of the episode you have watched in XX:XX:XX format on the left and how much is left in that video on the right. If there are commercials in the video, and there are almost always commercials, they will be represented by a white circle on the progress bar (notice the above video).

Each episode usually has commercials. When the video is paused for a commercial break it shows how much time is left in the break at the top (see below). However, you cannot fast forward or skip ahead during a commercial. All you can do is stop the video. You can scrub forward using the small rounded rectangle at the bottom of the progress bar during the show itself. 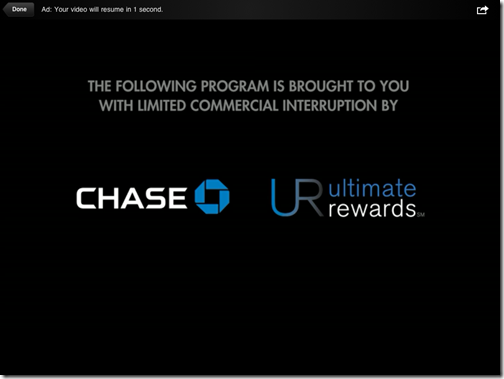 When you start a show, it will remember where you left off and if you finish the show on another device it will begin from that point. This is helpful if you watch a movie and get only 30 minutes into it and then want to later complete that video on your computer, another iPad, or your iPhone. 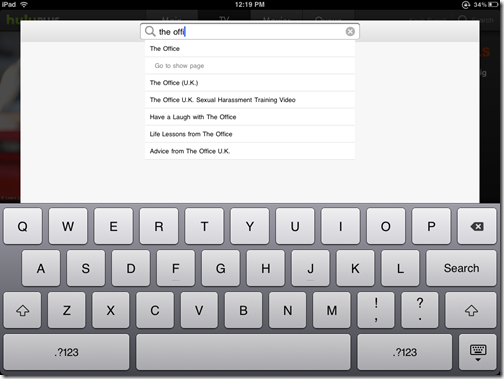 To find shows tap on the search button. Start typing and the box turns into a drop down list of shows  with the search string in the title/description.

I like the hulu Plus app for a number of reasons. The video streaming quality is usually very good with a decent Internet connection. It streams in 720p for most content, depending on the speed of  your connection. Caching (loading about 30 seconds or more before the video starts) is quick. I have tested it on my 10MB/sec cable connection at home with no problems at all. I have also used it over a Verizon MiFi and it was decent. Video quality is determined by the speed of your connection. You can view videos over 3G if you have the 3G iPad.

Some of the most glaring weaknesses are that not all hulu shows are available on the iPad. I like the Simpsons and watch it on hulu, but it is not on the iPad version. There are other shows missing as well. The video out via the iPad VGA dock adapter is not enabled, so you can only watch videos on the iPad, which is not very pleasing for more than one or maybe two very close people. The app has crashed on me a couple of times. Once was when I was adding a show to my Queue and the other was when I started a new video. But those crashes have been few and far between. Finally, it is a little annoying that you have to sit through commercials for a paid service. Of course I pay much more for my DirecTV service and nearly every channel has far more commercials. But I would willing pay a little more if all content was commercial free and could be viewed on a larger screen via the VGA adapter.

If you are  a regular hulu user and want access to more than just the latest episodes, the $10/month fee may be worth it. Other than that, the app is not recommended since it is limited. Hopefully the free version will be the same as the free version of the web site when it comes out of beta. You can find a list of all the content available on the iPad at the hulu Plus web site.