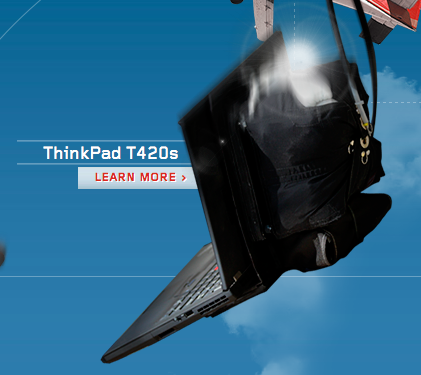 Manufacturers like to point out fast boot times on notebooks these days, but few go to the extremes Lenovo has to show off the 10 second boot time on Rapid Boot equipped ThinkPad T420s and IdeaPad Y570 notebooks.

To show off how fast the ThinkPad T420s can boot, Lenovo strapped a parachute to the notebook, rigged up a release to the DVD drive and threw the notebook out of a plane.

This new commercial fits in with the “For Those Who Do” campaign that Lenovo launched and shows off the only reason your notebook boot time might matter.

Check out the Lenovo Boot or Bust Parachute video:

When you think about boot time, it’s easy to blame Apple for kicking of the obsession with fast booting notebooks, and a year or two ago boot speed was a big deal. Shutting your computer off was a common when you went from place to place, but these days OS X and Windows both handle sleep and hibernate so well that we rarely shut off our notebooks. While you may not want to carry around a sleeping notebook with a hard disk, all of the fast boot options involve solid state drives which aren’t affected by your bouncy walk between offices.

We will probably see manufacturers boast about boot time for another year or two before the market settles down and even entry-level notebooks boot fast enough to make boasting about boot times a moot point. Until that time, for those who do, and don’t want to wait there are now a few more options for fast booting.

Even though we think fast boot times are on the way out as a marketing point, you can see our own Xavier Lanier take the stage with Danica Patrick to race the MacBook Air against the Lenovo ThinkPad T420s at CES 2011.

For more on how Lenovo made the Boot or Bust video, watch the behind the scenes video. You might not need to boot your notebook in under 10 seconds, but there’s no arguing with a notebook that can pull its own ripcord.